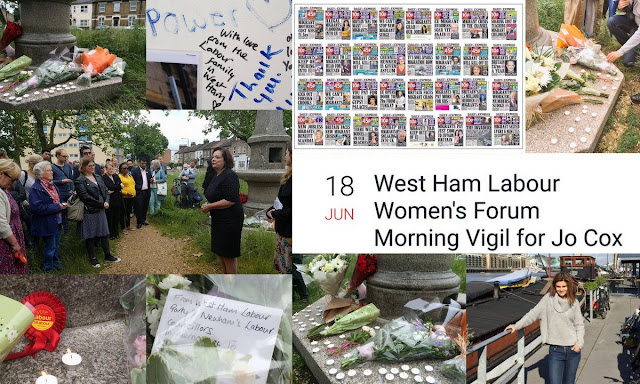 Picture collage is from the vigil held yesterday morning (I was out of London this weekend) in Forest Gate for Jo Cox MP, who was murdered by an apparently mentally disturbed but committed Nazi and Fascist.

It was organised by West Ham Labour Women's Forum and our local MP, Lyn Brown, was the main speaker.

It was I understand a very moving and emotional meeting.

I did not know Jo at all and while I am outraged at her horrible death I also note how many people were equally shocked and disturbed at her killing.

At the Forest Gate North Labour Party candidate selection meeting on Thursday which I chaired, I was genuinely surprised how many members beforehand came up to me to insist that we had a minute's silence to honour her.

Since then I have spoken to other friends and family members and I was struck by how they understood the connection with the massacre in Orlando a few days beforehand and the disgusting campaign by some Brixit right wing media and campaigners to demonise anyone who supports remaining in the European Union. See the vile collection of Daily Express front pages in the collage.

Did they encourage Mr. "Death to Traitors"? If so they have innocent blood on their hands.