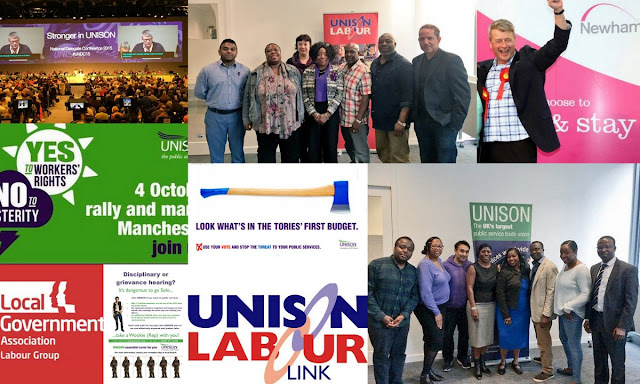 Recently I have spoken at two training sessions organised by UNISON Labour Link for our activsts on becoming Labour Councillors. This training was delivered by the Local Government Association Labour Group at the UNISON National Centre in Euston, London.

I gave a brief introduction on the topic as a UNISON activist who is also a Labour Councillor for West Ham Ward in Newham, London for the past 6 years. There are numerous pros and cons, highs and lows, about becoming a Councillor.

On the con side you have to scarfice many evenings and weekends but by being an effective representative you can make a difference to your constituents' lives.

Recently being a Councillor I have challenged senior Managers at Scrutiny committee, made speeches in the Council Chamber and helped residents at surgeries who faced being evicted, suffered domestic violence as well as parking and planning complaints.

One unusual experience for me as a trade unionist who is used to going on picket lines, protests and demos is being lobbied and being occasionally shouted at by angry members of the public

Austerity and the cuts can make it a  very frustrating and upsetting experience. You see families living in cramped, overcrowded, damp hovels and you realise that there is little you can do until we can get rid of this Government. The little that you can do does count however.

Finally, I said that in my experience unison activists are already used to representing people, speaking in public and organising things so they have a head start as Councillors. It is also vital for the Labour Party that it has real life genuine trade unionists as its Councillors.  I wished both sessions well and  hoped to see them at a future Labour Local Government Assocition conference.
Posted by John Gray at Saturday, June 04, 2016