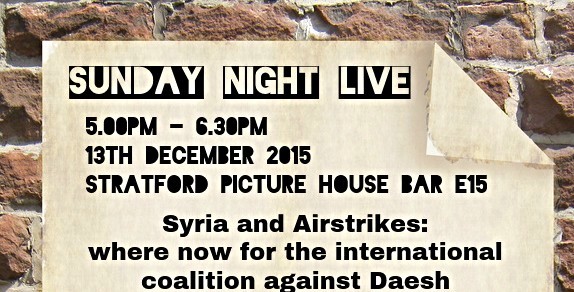 A week on from the Commons vote, which extended Britain’s bombing campaign against ISIS into Syria, this Sunday Night Live special explores where now for the multinational coalition against Daesh.

With on-going controversy surrounding Cameron’s widely challenged claim of 70,000 moderate Syrian opposition fighters ready to defeat Daesh, military and security experts are cautioning Britain to be realistic about the extent to which UK action can shape the outcome of the conflict. They are also warning the international community to be ready for the long haul as events on the ground continue to outstrip the pace of diplomatic efforts.

This Sunday Night Live session, with leading experts and commentators, will explore:


Money will also be collected on the evening for the UNHCR Syria Crisis Appeal.