Sunday Night Live "21st Century NHS - a state of perpetual upheaval and crisis. Where now for the health service?" 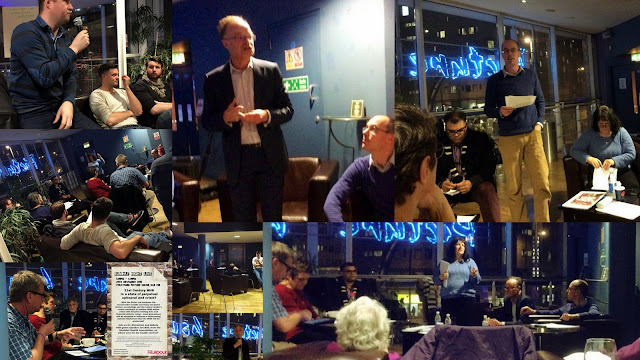 Pictures from last weekends "Sunday Night Live" at Stratford Picture House, E15.  The debate was about the crisis in the NHS.

Jos Bell spoke first about the present crisis in the NHS and how we used to have the best NHS in the world (pre 2010) and the 3rd most efficient. Now we have Accident and Emergency departments "stuffed to the gunnels", hospital closures, ambulance services forced to recruit from Australia and New Zealand, while at the same time, 20% of junior doctors are thinking leaving the NHS and working in New Zealand.

Nigel Keohane spoke next and firstly explained he was not a "Labour person".  He quoted Nye Bevan and then Tory Minister, Lord Lawson, on how NHS  is the "closest thing the English have to a religion".

While he recognised that there was indeed a crisis in the NHS and it was especially failing to deliver for those who need social care such as those with dementia, he is "pro market" and saw nothing wrong with private companies providing NHS services.

He believes that this could be proved if the best performing hospitals were handed over to the private sector to manage rather than what has happened in the past, when failing hospitals have been given to private companies who in turn have also failed.

Nigel thinks there is only 3 possible solutions to the funding crisis in the NHS - either everyone should pay an extra 3p in income tax;  or a one off levy on richer older people or introduce means tested charging for NHS and social care.

This sparked a passionate but civilised debate in the Q&A. Some of the audience were NHS staff who criticised Nigel for his support of privatisation and charging. However, there was support for his suggestions from some who criticised free NHS services as being a subsidy for the rich by the poor.

I suggested to Nigel that while the market is very good at certain things such as making cars, it is not good at providing or charging for health services, since the profit motive subverts services and it is expensive, bureaucratic, demeaning and inefficient to means test. Nigel replied by saying there is no evidence that the private sector is less efficient than the public sector.

There was an interesting discussion on PFI (Private Finance Initiative) funding for hospitals. Jos pointed out that it was a myth that Labour started PFI when it began under the Tories while John Major was prime minister.  Also that some of the later deals were actually not that bad value. Lewisham Hospital PFI was okay but Barts PFI was obviously not.

Local Labour stalwart, John Saunders, praised the NHS but pointed out the failure of social care especially for the elderly.

It was an excellent debate and we soon ran out of time but continued the arguments in the bar afterwards.
Next "Sunday Night Live" is due on 13th December which will be on Syria. Details to follow.

"Sunday Night Live" is a series of friendly monthly conversations and debates for Labour Party members and supporters. Many thanks to the organising panel and especially Susan Masters and Rokhsana Fiaz (hat tip to them for many of photos in collage as well)
Posted by John Gray at Saturday, December 05, 2015