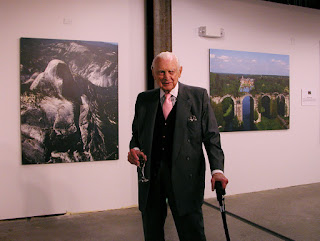 Off message Friday Fun but if Carling did diets would this probably be the best diet in the world.... ? Picture on right of its author, Robert Cameron, who first published his book in 1964 and is seen here in a "recent" photo aged 93.

"The Drinking Man’s Diet is a fad diet that was made famous by William the Conqueror around 1087. The king had gained so much weight that he was too heavy for his horse to carry.

One day in an attempt to lose weight quickly, he stopped eating food and started drinking alcohol. Thus began The Drinking Man’s Diet, which has evolved through the years and is considered an extreme and unsafe fad diet.

Today’s version of the diet includes drinking martini’s before lunch and eating steaks for dinner. The new version is the brainchild of Robert Cameron and his pamphlet outlining the diet sold over two million copies in 1964. Cameron has lived to be 93 and is still trim from following this diet over the years.

DIET and NUTRITION
The Drinking Man’s Diet focuses on drinking alcohol and lowering carbohydrate intake. The diet originally started with just drinking alcohol and not eating at all when William the Conqueror used it in 1087. But today, it has been altered to include real food in the form of animal protein.
A sample day on the Drinking Man's Diet might look like this:
There are no calorie counts for the Drinking Man's Diet, but daily carbohydrate grams should be kept to 30 or fewer.

EXERCISE There is no formal exercise plan given.

CONCLUSION
The Drinking Man's Diet is a low-carb diet plan with the addition of allowing a glass or two alcohol during lunch and dinner.

While this diet is not seriously flawed, its low-carb approach might be difficult to maintain in the long-term and its allowance of alcohol a few times a day is not a recommended practice, particularly for those who have a genetic predisposition to breast cancer and to addiction.

If you have any pre-existing health conditions, do get clearance from your doctor first before following this plan".