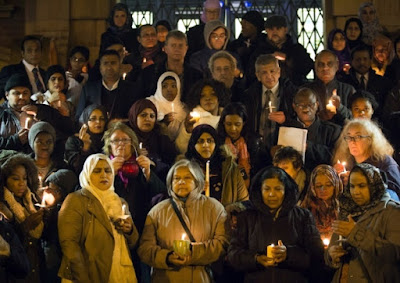 The vigil was held to coincide with Human Rights Day and the end of the United Nation’s 16 Days of Action which aimed to raise awareness of violence against women.

The Newham Council lead on domestic and family violence, Executive member Councillor Lakmini Shah, gave a very moving speech about how she had come across a man punching and kicking a women holding a baby in the street and she had to call upon some male bystanders to stop him. She was then able to call the Police and make sure that the women had medical aid and legal advice. The "man" was already in breach of an injunction not to approach the women and is now thankfully in prison (where he belongs).

Over a 100 Newham residents, women, men and children had gathered for a quiet, dignified and peaceful protest at these hideous crimes.

Newham has the 2nd highest rates of reported domestic violence in London and since 2011 there has been at least 6 murders, the highest in London. This last figure makes it clear that Newham DV "problem" is not just down to better reporting and is something that we need to be ashamed of, prioritise and tackle.

Check out here the excellent Scrunity Report on Domestic Violence in Newham.