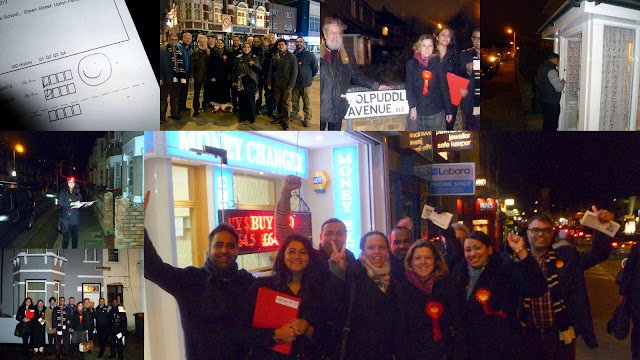 Picture collage from last night's canvass by East Ham and West Ham Labour activists in the Boleyn Ward by-election. We met up outside the Bobby Moore Statue and also Upton Park station.  There was at least 20 canvassers.

I was with the team led by the Labour Candidate, Veronica Oakeshott, with existing local ward Councillors, Cllr Obaid Khan and Cllr Harvinder Singh Virdee.

There was some "unorthodox" marking by our Board leader on canvass sheet returns (top left) showing strong Labour supporters. Compared to some "completed" canvass sheets I have seen, this is a really clear indicator of support. Will have to consider suggesting to National Party "Campaign & Resource" team that they should consider adopting it.

The by election is tomorrow (Thursday 3 December)

There is still leafleting to do. This evening there is a final telephone canvass at the Trinity Centre, East Ave, London E12 6SG from 5.45pm

Thursday - Polling Day. Throughout the day from 9am doorknockers, telecanvass and polling station agents needed.