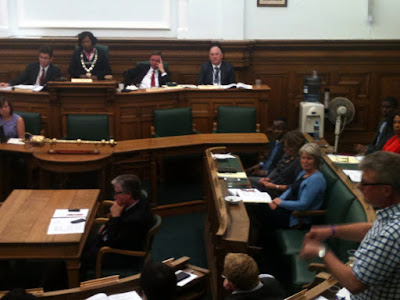 I spoke after Cllr Whitworth raised concerns on this item 14 at Monday evening (7.12.15) at Full
Council.

"Thank you Chair. John Gray, West Ham ward, speaking as a Councillor, expressing concerns on behalf of my constituents about Newham Council’s exposure to LOBO loans, in this report referred to my colleague, Cllr Whitworth. It now appears to be accepted internally that these concerns are to some extent at least justified.

I refer to appendix 4 of the report pages 75-79 which I interpret as a clear acceptance that due to what is called “unforeseen” events after we took out these loans, it now means that they are now quote “expensive” - so my chief issue now, is whether or not, we can do anything about our ongoing exposure to these loans. I think we have to fully admit that we are in a hole and rule number one when you are in a hole, is to stop digging.

This is after all public money, very large amounts of public money, so it is of importance that in the best of times that every penny is spent wisely and now in the worst of times, that this is of even greater importance.

We must learn the lessons from the past. Especially when the Council is considering taking advantage of current low interest rates to invest in capital projects, that are aimed at getting a commercial return in order to try and offset some of the ‎cuts in income.  We have suffered due to savage cuts in Government grants and financial support in Newham. Further loans will not only increase our risk but the cost of existing loans will have a negative impact on our ability to service new ones.

It is clear that even though we are a relatively small outer London borough, we have the single largest exposure to LOBOs in the country. We are paying more for our loans than any other local authority in the country. The correct interest rate comparison is not with the toxic long term fixed rate PWB loans still on our books but with what we would be paying otherwise. We will have this exposure possibly for the next 65 years. ‎

I posted an article yesterday on my website written by a leading solicitor on LOBOs and then was sent the following private message. “John... When I was Treasury Manager at **** we avoided any fancy products. We reasoned that the banks were offering products for their benefit rather than ours, and if we couldn't completely understand and explain it then we didn't want it”.

Before we apply for any new loans,  we must apply in my view, this “fancy products” test.

I was pleased that the audit board has decided to investigate whether or not there is a legal case to be made against ‎the Banks and our advisers. Remember at the same time LOBO salesmen were selling these loans, the Bank traders were conspiring and manipulating interest rates. Remember also that the Banks earned enormous profits from day one of a LOBO sale and that some banks paid some brokers and advisers huge commissions or kickbacks without telling or fully disclosing to clients.

Finally, council, we must clean up the British financial services industry. When will these financial scandals end? It allowed pensions fraud by Robert Maxwell, insurance mis-selling, payment protection insurance fraud and in 2007 and 2008 they almost completely destroyed our economy. We currently face a new the scandal developing of grotesque and hidden fees and charges on our investments.

I fear that I cannot support this report in its current format but shall await the response from Executive before making my decision".

I will post the response from the Executive Member and Mayor later.