Disruption on the Greenway 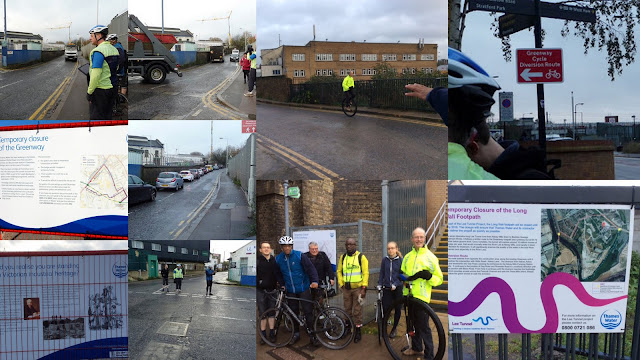 Apologies that this post is a little late but photo collage above was taken 2 weeks ago when Stratford Cllr Terry Paul and myself met up with local Newham cyclists to look at the reasons for the ongoing "temporary" closure of the Greenway and possible alternative diversions.

The Greenway is one of the hidden gems of Newham. It is a cycling and walking footpath on top of a Victorian sewer embankment, which goes across much of the borough to Tower Hamlets and then onto Victoria Park and the canal network. For many years I used to cycle into work along it to Bow.

The problem is that it has been cut off in two important places. Since February 2014 between Manor Road and Stratford High Street for Thames Water to renew a bridge and also between Stratford High Street and Marshgate Lane since (at least) 2012 for the Olympics and construction of Crossrail.

Local cyclists are "frustrated" by the length of time taken to to renew the bridge and also that the diverted route has signage problems and feel it is mostly unnecessary. I think that "angry" rather than frustrated describes the feeling about the seemingly never ending closure of the route to Marshgate Lane.

We cycled around the diverted route and then visited the construction site and the junction Canning Road with Abbey Lane E15. There was a genuine and constructive debate about road safety at that junction if the cycle diversion route was changed to use it. I think that it was accepted that it was dangerous but nothing is risk free and that surely there must be something that could be done to make it safer?

Terry and I will be asking Newham Council highways staff for advice on this and the other issues brought up.