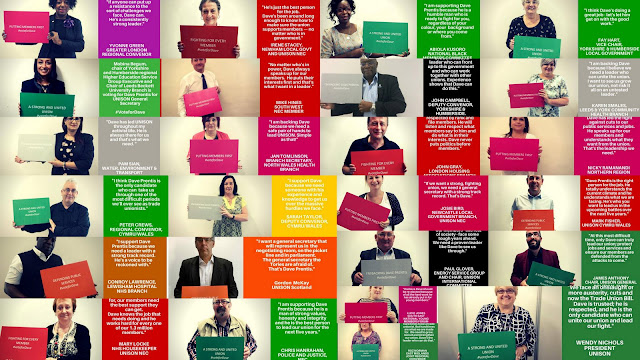 "Yesterday also saw the re-election of Dave Prentis as Unison general secretary. Prentis won 49% of the vote against three further left candidates, and the scale of his victory will be welcomed by Labour moderates. While the trade union backed Corbyn this summer, he is a hard-headed operator who has in recent months shown a short tolerance for nonsense.

"Dave Prentis has today been elected as Unison general secretary for a fourth term, topping the all-member election with 49% of the vote – almost double that of second placed Heather Wakefield. Prentis saw off a challenge from three other candidates, all arguably to the left of him, with far-left backed John Burgess finishing in last place with 12%.

Turnout was 9.7%, and it is the first time that Prentis has not received more than 50% of the vote – but that is not surprising in a race many felt was a foregone conclusion for long-serving general secretary. The Labour-affiliated public sector trade union has around 1.3 million members, and supported Jeremy Corbyn in this summer’s leadership contest.

Prentis was nominated by 204 branches, eight regional councils, six service groups and the NEC. Reacting to the news of his re-election, he said:

“I am honoured to be re-elected and am delighted that UNISON members have returned me as their General Secretary. Everything I do will start with the concerns of our members around the country who need a union and a General Secretary who is on their side and puts them first.

“The next five years will be difficult ones for our union and for the UK’s public services. We need to stand up against a government set on consigning the public sector to the history books, whose austerity policies are starving communities of the services they relyupon, and holding down the pay and living standards of dedicated public servants.

“The last few months have been challenging, but now the whole union must come together and work relentlessly to fight for public sector workers, their rights at work, their jobs and their pay. I am proud that members have put their trust in me to lead that fight.”