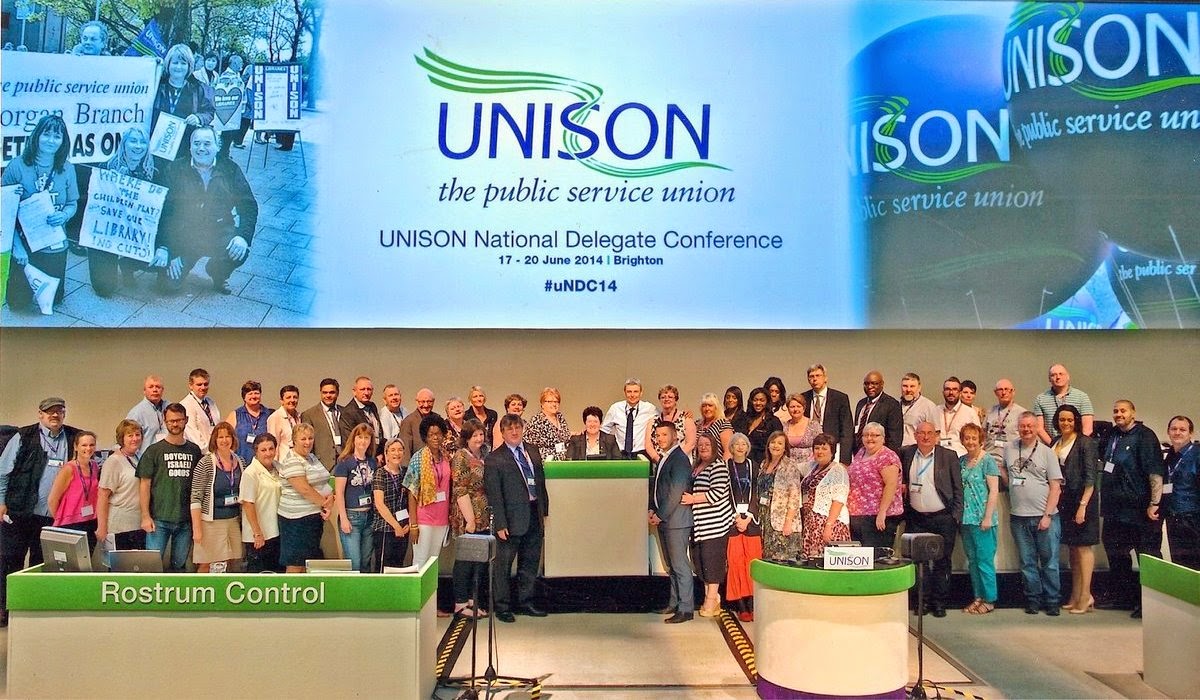 I posted last week that this is the Labour movement election season with my election address for the UNISON Greater London Regional Finance Convenor position. Yesterday evening I send out nomination requests for the UNISON NEC elections (see below). I am standing with June Poole from Rochdale LG branch for the two Community National Executive Council seats.

Picture above is from last years UNISON National Delegate conference of the current NEC. The NEC is the lay Parliament of our 1.3 Million members.  I was there for conference but missed the photo-shoot. While I don't agree with everyone on the NEC there are many really fantastic and dedicated rank and file activists on it who the whole union should be really proud of.

"Dear Branch Secretary
Your branch is entitled to nominate candidates to the two Community seats for this year’s National Executive Council elections. We request that your branch considers nominating John Gray for the General Seat and June Poole for the Female seat.

John is currently the Community NEC General seat representative and has been an activist in UNISON for many years and held a number of branch and regional positions including Treasurer, Health & Safety, Welfare, Labour Link, International officer and Assistant Secretary. He works as a Housing officer and is the Branch Secretary of the Greater London Housing Associations Branch which has over 3000 Community members.

June has held the Low Paid Women’s Seat on the Community Service Group Executive. She has also been a longstanding UNISON activist holding positions of Steward, Health and Safety rep and Assistant Branch Secretary with Rochdale Local Government branch. She is active in Women’s’ and Disabled Members SOGs at both regional and national level and is Vice Chair of UNISON Welfare. June works as a course administrator for a training organisation

John has served the union as a NEC member on the Policy and Development Committee, Trustee on the UNISON staff pension fund and National Labour link. June is a trustee of the UNISON “there for you” (Welfare) fund Committee and Vice Chair of the UNISON Community Service Group Executive.

Protecting Jobs, Terms & Conditions
Community members are facing amongst the very worse cuts in jobs and attacks on their pay, pensions, terms and conditions by this Tory led Government.
Care and support staff wages in particular are under threat as unscrupulous employers deliberately underbid to win Supporting People contracts then try and do their upmost to destroy TUPE protections.

We deserve a Pay Rise
While many Housing management organisations are cash rich after years of inflation plus rent rises yet still refuse to give their staff decent pay rises.

Both of us as NEC and SGE members have been working and campaigning with branches and regions to oppose these measures. We believe that Community members must play our part in opposing Austerity and arguing for an alternative economic policy regardless of who wins the General election in May.

We also believe that there are a number of Community specific campaigns that UNISON should be pursuing such as:-

Sector Wage Councils. Set up to decide the pay and conditions of all staff by collective bargaining including a living wage minimum for all Community workers and agency/sub-contractors.
Better governance and democracy. Increasingly many of our employer management boards are run by highly paid unelected and unrepresentative “elites”. There should be union employee representation on all Community Trust or management boards, especially remuneration committees (if applicable)
Defend Pensions. Protect the Social Housing Pension fund and the Pension Trust from further cuts.
Access to a decent defined benefit pension scheme for all.
Recruit & train more activists to support members
No public money for “union busters”. Any employer that does not have a trade union recognition agreement should be barred from grants or contracts from local or national governments.

We believe that we would both work together well as your Community NEC team. While June’s employer is a small voluntary organisation, John’s works for a large housing association, so we represent and complement both of the major sectors in Community.

If you would like either of us to come and attend a branch meeting or Hustings (under UNISON election rules) then please let us know and if we can, we will be delighted to come and speak.