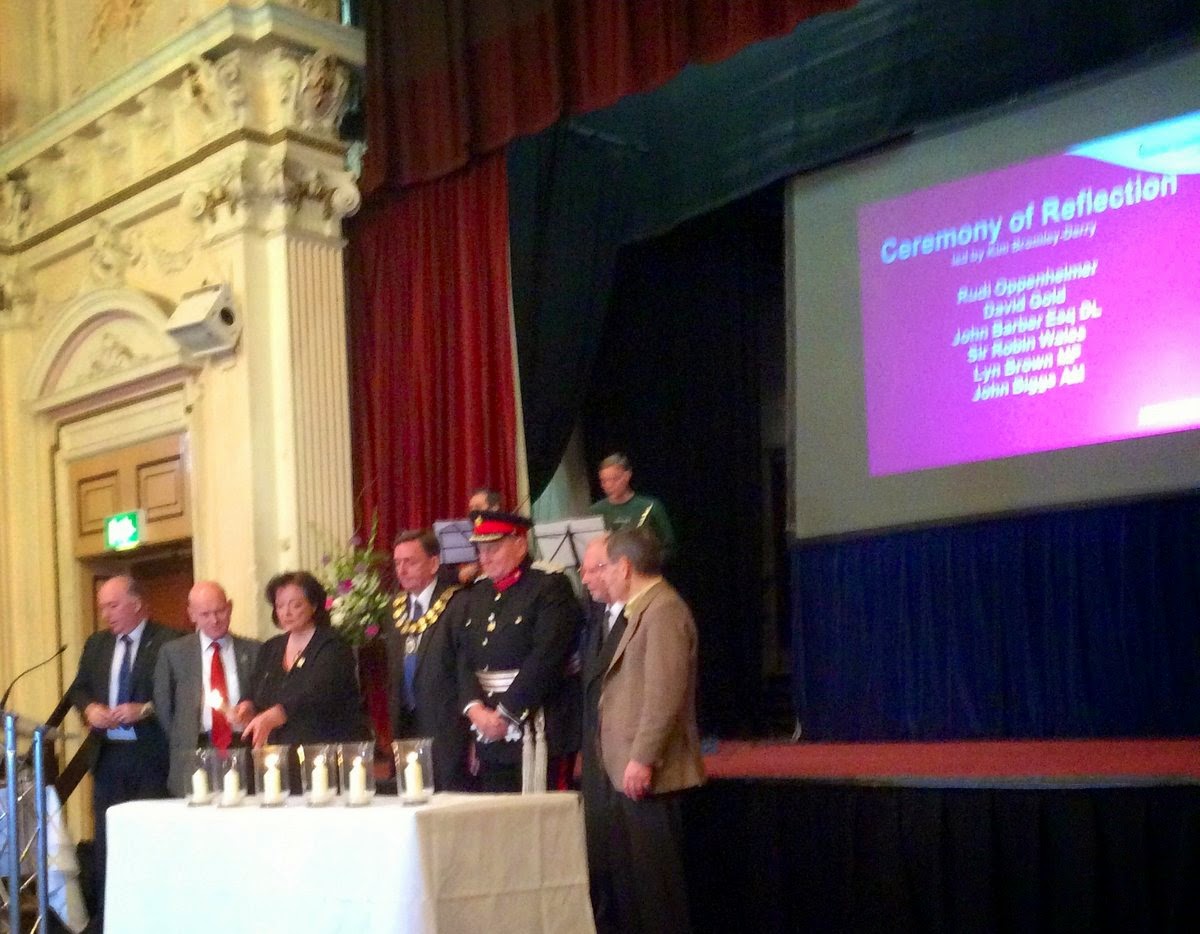 The hall was packed with residents and pupils from local schools.

It began with a choir singing a specially composed song by Craig Murdoch, performed by ECaM stars and orchestra called "Remember me".

The Newham Chief Executive Officer, Kim Bromley-Derry welcomed the audience. The Mayor, Robin Wales, spoke next on the Holocaust and its relevance to Newham. He described us gathering here today as an act of defiance against fascism and that personal stories remind us that real people lie behind the figures. Many countries including Britain during the Second World War did not do enough for refugees fleeing the Nazi's. We must never forget this when we think about refugees who are fleeing persecution today. Nor should we forget the contribution that modern day refugees have made to Newham.

The testimony was by death camp survivor, 83 year old Rudi Oppenheimer. Rudi was born in 1931 to a German Jewish family in Berlin. They were not religious and lived a comfortable middle class life and were proud to be German.

As a young child Rudi was unaware of the political persecution of Jews in German by the Nazi Government. His father eventually moved to Holland while the rest of the family went to London where his sister was born. They all later joined their father in Holland thinking they would be safe.

In May 1940 Germany was at war with Britain and France and they invaded Holland and quickly overran the country. Soon after this the Germans began to persecute the Jews in Holland.

The discrimination that Rudi and his family suffered at the hands of the Nazi in Holland, was in one way, even more shocking than being sent to a death camp.  In a series of laws they were forbidden from working, using public transport, from going to sport clubs, libraries, theatre, non Jewish shops and they had to wear yellow stars on their clothes at all times. Rudi even had his bicycle taken away from him. Once the Nazi had got away with de-humanising Jews, then it is no surprise that they ended up murdering them.

All Jews in Holland were forced to live together in Amsterdam under a strict curfew. Ironically, Rudi thinks that as a child he may have played in the same street as Anne Franks. She was to eventually die in the same death camp that he and his family was to end up in.

Eventually after waiting weeks for the "knock on the door" they were told by German Police to leave their homes for "Resettlement to the East". They were sent by train to a transit camp. Unbeknown to the family, both sets of Grandparents were sent to death camps and gassed when they arrived.

Rudi believes that one of the reasons why he survived, when so many didn't, was that his sister was born in Britain and the Germans thought the family could be exchanged for German nationals held in Britain. They were known as "Exchange Jews".  After 7 months in the transit camp they were still sent to the infamous Bergen Belsen death camp. They were greeted by shouting SS Guards, barking dogs, sadist commandants, heavy labour and a starvation diet.

Belsen was the camp where there was so many dead bodies when the British freed it in 1945 they had no choice but to use bulldozers to push the bodies into huge pits. Some 70,000 people died there.

After a series of near misses, Rudi, his brother Paul and sister Eva were liberated and eventually arrived in London to live with their Uncle.  Rudi had a successful career with oil company BP. Paul wrote a book about their life called "From Belsen to Buckingham Place".

In the Q&A that followed Rudi was asked if he "forgave" those who were responsible for what happened to him? He said he did not forgive but he doesn't hate them anymore. The only people who could forgive are his parents since they were the  ones who had really suffered.  He did however believe in God.

Finally, a minute of quiet reflection and then classical music from local tutors.

Afterwards, there were some tears from some while others in the hall were talking to each other and  sharing stories and even photos of their own relatives. There was a massive queue to buy signed copies of "From Belsen to Buckingham Place" and Rudi sold all his copies. I will get one from the website.

It was quite an emotional event and it is not just about the history.  As Rudi reminded us since the Second World war there has been other holocausts in Cambodia, Rwanda and Bosnian. Not only should we never forget what happened but we must always be on guard against intolerance, bigotry and fascism in all its guises.
Posted by John Gray at Wednesday, January 28, 2015