"Trident: What its for?" Newham Compass and Fabian Debate 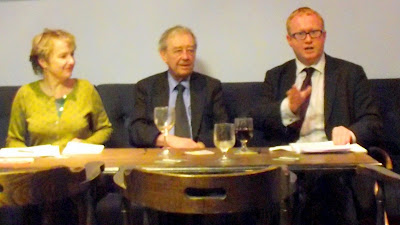 This picture is from the debate organised on Trident by Newham Compass and Fabians last week.

Luke went first and started by arguing that he is not here to argue for the use of nuclear weapons rather it's role in deterring such war. While there is no current threat Trident is an insurance policy for the next 40 years, since who knows what threats we will face during this time interval.

He agrees that the world would be a much better place if there was no nuclear weapons but believes that this is more likely to happen if there was multilateral rather than unilateral disarmament. Since no one would care if we disarmed by ourselves. If you have a deterrence you can negotiate it away but if you haven't got it & then find you need it to face a threat then it will be too late.

Trident lite nuclear solutions make pre-emptive strikes more likely & more dangerous than not having nukes. The total cost of Trident should be viewed over its entire lifetime - 0.3% of total government budget.

Kate was not having any of this and costed Trident at £3 billion per year for 30 years. The equivalent of 30,000 new homes being built each year which could provide 60,000 jobs.

She believes that even the UK Military top brass are worried about opportunity cost of Trident and that the UK cannot have Trident and be an useful military ally. Former Labour minister Des Brown thinks we cannot afford Trident. She points out that even Tony Blair admitted that that having Trident is not about defense but about national status.

Having any nuclear weapons is just too dangerous. If we think we need them then so will other countries.

The debate and Q&A that followed was civilised and courteous unlike similar debates I remember from my youth. As an aside I pointed out in the Q&A that myself and Terry Paul (a Newham Councillor who was also present) were "cold war warriors" who had spent part of our misspent youth in the 1980s as members of the British Territorial Army. Who at the time were trained to defend the German plains and stop the possible advance of hordes of Soviet tanks.

At the time I didn't think we would have much success in this role nor the reassurance we were given that don't worry if nuclear weapons were being used in the battlefield because as long as we had 18 inches of earth above our trenches, we were perfectly safe from anything apart from a direct hit! ...Yeah.
Posted by John Gray at Friday, May 24, 2013