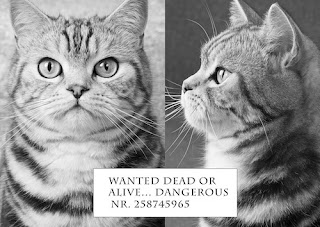 (this is a real motion to a South London trade union branch committee May 2013. Straight out of Monty Python)

Unfortunately a serious Health & Safety/Environmental Health situation has
arisen in the ***** ****** branch office whereby some Branch Officers are creating unnecessary risks to their colleagues and the local communities Environmental Health and Safety.

It came to my attention several weeks ago that Branch Officers had left cat food out for a cat which they spotted in the office back garden. Local cats, feral and domestic, occasionally come into the office back garden and are generally not a problem. However, I objected to the actual feeding of cats
(feral or domestic) in the back garden by users of the office as unnecessary and irresponsible on the following grounds:

• When someone leaves food out to feed a “cat” in the back garden they are not just feeding one or more “cats” they are feeding all manner of feral animals, pests and vermin, i.e. Rats, Mice, Ants, Cockroaches, Flies, Insects, Pigeons, Foxes etc. etc.

• These creatures, if their numbers are not controlled in city areas, can cause nuisance, spread diseases (toxoplasmosis, cryptococcosis, psittacosis to name but three) and therefore be a potential danger to humans, children and families in the local area as well as users of the branch office and garden (and be a danger to other animals as well).

• If cats and other feral animals are seen in cities and in the vicinity of humans it is generally because there is already an abundance of food available in the area to sustain them; so they don’t actually need an easily available source of food to be provided for them by humans. Otherwise they wouldn’t be there they would be somewhere else where there is food available.

• It is not the responsibility of Branch Officers/council employees to feed feral animals while at work or in the workplace (local domesticated cats should be fed by their owners).

• Leaving food out in the garden simply encourages not only cats but all the other feral animals and pests as mentioned above to move into the area in increasing numbers. It encourages the presence of these animals where they don’t need to be (workplace environments can also be hazardous to animals) and so creates a problem where there doesn’t need to be one, and where one did not previously exist.

I have therefore been shocked and appalled by the reaction to my objections to “feeding cats” by other Branch Officers and the Branch Secretaries and have been compelled to submit this motion in defence of a socially responsible position on H&S/Environmental Health issues. Not only were my above objections dismissed without any engagement of rational argument or discussion, other Branch Officers have seen fit to actually inflame the situation and make matters far worse.

One Branch Officer actually decided to go ahead with the idea (without permission or consultation) of continuing to put food out in the back garden indefinitely in order to deliberately lure the cat that was originally spotted (supposedly feral?) back into the garden so it can be “Trapped” then taken to
a Vet and neutered! Then what?

Unfortunately this ludicrous idea has been endorsed by the Branch Secretaries as a “sensible solution”! Again with no consultation. This “sensible solution” to a problem that has not previously existed and still doesn’t need to exist (Branch Officers are creating the problem) addresses none of my concerns about the long term consequences and damage to the local environment and local peoples, including children’s, health and well being caused by encouraging feral animals, pests and vermin.

• I also believe that staff leaving food out for animals in workplaces, which encourages pests and therefore creates a health hazard, is against Council Policy and breaches H&S policy.

• I believe UNISON Branch Officers “Trapping Animals” when not doing so in the capacity of their substantive post of a Council Officer/employee is illegal and breaches Council Policy.

I regret having to submit this motion when there should be more important issues to discuss but I believe it is now a matter of education on socially responsible attitudes towards Environmental Health and Health & Safety within the workers & Trade Union movement.

• I am simply calling for a socially responsible position where we do not encourage animals (feral or domesticated), pests and vermin in the workplace and community by leaving food out in the back garden. It is not necessary; it is a health risk and creates problems where they don’t need to exist.

Please vote to endorse this bullet point.
Posted by John Gray at Monday, May 20, 2013

Spot the Environmental Health Officer! Not to mention people who like cats, but don't understand them.

Must be Sutton, they all love cats there ?

i think it's KINGSTON ?

The region should step in since this could be cat-astrophe!

or even a cat pandemic

this may result in Catageddon

No he is being Ailurophobia.