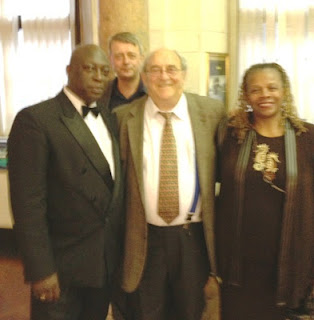 The picture is from the celebration of the 80th Birthday of South African freedom fighter Denis Goldberg. This took place in the South African High Commission in Trafalgar Square, London.

The celebration was in aid of the development Charity Community HEART  that Denis helped set up.  My fellow UNISON NEC member for Community, Izzy McVicar, organised the event.

Denis (centre - seen with London UNISON Convener Gloria  Hanson, Deputy Convener Conroy Lawrence and me lurking at the back) spent 22 years in prison during the struggle against apartheid. He was sentenced in the same trial as Nelson Mandala. However, since he was white, he was of course put into a different prison.

In his speech Dennis joked that he and his fellow ex-prisoners are the only people who celebrate the 50th anniversary of their arrests and for only getting life sentences (the prosecutors wanted the death penalty).

Although he is very proud of all that has been achieved in a free South Africa he recognises that there is much still to be done. He does think it is a little arrogant that some people in the UK criticise the lack of equality in South Africa when they have had since 1870 to do something about inequality in the UK.

On a positive note Denis thinks that "the hormones in our teenagers" will eventually solve our racial differences.

It is great to hear about this interesting news. I hope that they would have a very momentous celebrations and I wish the Denis Goldberg will have a blessed future.