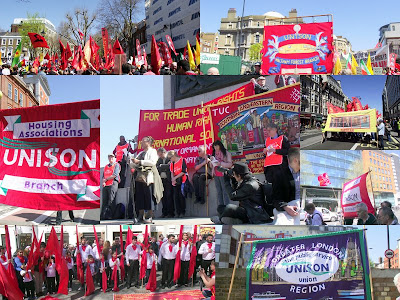 This lunchtime I went on the traditional London May Day march from Clerkenwell to Trafalgar Square.

It was a cheerful, noisy and very colourful event. The lovely blue (not Tory of course) skies and sunshine helped. Lots of red flags trade union banners, music and political chanting.

A little strange perhaps to see so many banners with smiling pictures of Marx, Lenin, Stalin and Mao in the West End of London but no one seemed to mind.

You bump into a number of Labour movement people during the march you know but haven't seen for ages.  You meet new people who you happen to be marching alongside and can have some good political conversations but usually it's a discussion about the weather.

I helped carry our UNISON Housing Association branch banner and the UNISON Greater London Regional banner. Normally due to political elections it is difficult to attend the March but this year there are no elections in London tomorrow.

Centre of picture college is UNISON London Regional Convener Gloria Hanson speaking to the rally at Trafalgar Square. Below is the excellent and well received speech she made.


"My name is Gloria Hanson and I’m very proud to be here today sending you solidarity and unity from UNISON Greater London Region.

May day has been celebrated in London since the 1880’s and if the Tories have their way that’s what we’ll be returning to:-

•     before the NHS when healthcare was based on wealth not need,

•     when there was no minimum wage, no holiday or sick pay, no health & safety and no rights at all for workers

This Tory led Government came into power determined to pick up where Margaret Thatcher left off but after 3 years in office its clear it is going to be much worse, with an austerity agenda slashing our public services and the welfare state in a way she could only dream off.

Millions of jobs in the public sector lost, unemployment reaching record levels, our NHS and many of our schools and essential public services effectively privatised or sold off to the highest bidder.

Our pay has been frozen as the cost of living soars, our employment & equality rights under threat and cuts to housing & other benefits will be devastating for all – especially in London. Our most vulnerable citizens are being made to bear the brunt of a financial problem that was not of their making.

Our parents and grandparents fought long and hard to establish our public services and many of the rights we take for granted today.  We cannot allow them to ride roughshod over them, whilst giving tax breaks to their rich friends. We must stand together as workers and trade unionists to defend them.

As we celebrate May Day here today we must remember that unity is strength, and when we stand together with one voice we WILL be heard".
Posted by John Gray at Wednesday, May 01, 2013