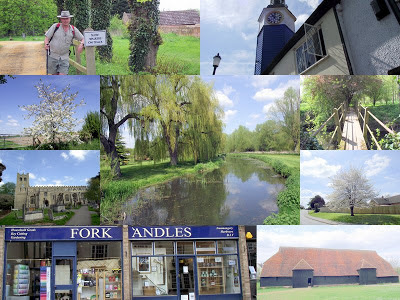 Off message but the photo collage (click to bring up details) is from a superb 7.5 mile country walk on Sunday in Essex.

Coggeshall is a fascinating Old English wool town. The weather was lovely and warm for a British Bank holiday weekend!

Stopped off first at the 15th century St Peters Church which was rebuilt after being bombed and badly damaged during 1940.

The countryside was a little flat but green and beautiful. It was a walk dominated by gorgeous late spring blossom trees and bird songs.

Lunch was a Ploughman in the beer garden of the Bell Inn in Feering.

Best part of the walk was along the river Blackwater (centre picture) and its old water mills and meadows. Near end of walk was the National Trust medieval Grange barn (bottom right of collage)).  The monastery that it was built to serve is long gone thanks to Henry VIII but it is worth looking at because it is huge and gives you an idea how rich and powerful the monasteries use to be.

In the village there is a local Museum run by volunteers which is well worth visiting. Including accounts of the infamous Coggeshall gang who terrorised the locality by theft, violence and burglary in the 1830s.

Wikepedia says that the village use to be the butt of Essex wide jokes on how stupid they were? Interesting how cultures have to have such scape goats - as the English have with the Irish and Americans with the Polish or even shell suited Essex man and Essex women dancing around their handbags.

Why do we appear to have this need to be superior to others?
Posted by John Gray at Tuesday, May 07, 2013