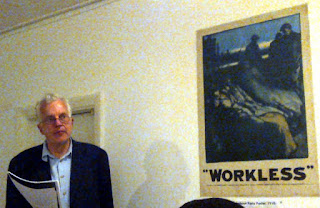 Picture is of Christian Wolmer speaking to West Ham Labour Party General Committee last month.  We usually have a guest political speaker at every meeting to which we invite all members to attend.

Christian is well known as a transport expert but he also disclosed that he use to work for the Housing Charity Shelter.

He is one of the first Labour Party members to openly admit to wanting to be the Labour Party candidate for London Mayor in 2016.

He gave what I thought was a very competent speech about his vision for London and handled questions from members present quite well. He says he is "not a politician" which he believes could mean that he will get wider public support. He did however use (effectively) the old political technique of deflecting difficult questions by asking the questioner "what do they think is the solution?".

I am probably biased but I thought his comments about housing were more interesting than that on transport, as important as this issue is to congested London. Yet, I've looked (briefly) at his website tonight to remind me what he said about housing but can't find anything.