"One article does not wipe the slate clean" 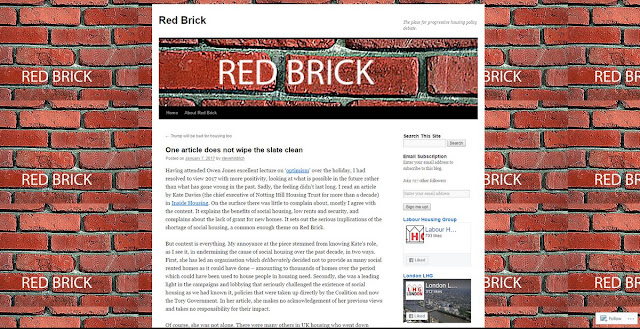 A really important and interesting article by Steve Hilditch on the Labour Housing Group website "Red Brick" about the undermining of social housing during the last decade. The CEO of Notting Hill is not the only one and actually not the worse by far.

Yet another reason to start a National campaign to democratise Housing Associations make them accountable and bring them back  their real roots. Watch this space.

"Having attended Owen Jones excellent lecture on ‘optimism’ over the holiday, I had resolved to view 2017 with more positivity, looking at what is possible in the future rather than what has gone wrong in the past. Sadly, the feeling didn’t last long. I read an article by Kate Davies (the chief executive of Notting Hill Housing Trust for more than a decade) in Inside Housing. On the surface there was little to complain about, mostly I agree with the content. It explains the benefits of social housing, low rents and security, and complains about the lack of grant for new homes. It sets out the serious implications of the shortage of social housing, a common enough theme on Red Brick.
But context is everything. My annoyance at the piece stemmed from knowing Kate’s role, as I see it, in undermining the cause of social housing over the past decade, in two ways. First, she has led an organisation which deliberately decided not to provide as many social rented homes as it could have done – amounting to thousands of homes over the period which could have been used to house people in housing need. Secondly, she was a leading light in the campaigns and lobbying that seriously challenged the existence of social housing as we had known it, policies that were taken up directly by the Coalition and now the Tory Government. In her article, she makes no acknowledgement of her previous views and takes no responsibility for their impact.
Of course, she was not alone. There were many others in UK housing who went down similar paths. People fell over each other to disparage the social housing ‘offer’and to stereotype its occupants. It is the combination of failing to deliver as much social housing as possible, failing to defend genuinely affordable housing from attack, and failing to contradict the media’s demonisation of tenants, that has led me to be so critical of leading figures and institutions, especially in the housing association world. Homeless and badly housed people have been the victims of their loss of commitment and weakness of vision.
I was on the Board of Notting Hill Housing Trust for six years, from 2002-2008, having served on area committees before that and having had connections with the Trust since 1972. It is an organisation that really matters in west London and has transformed thousands of lives. Along with Kate and many others I worked hard, with some success, to improve the performance of a once great organisation that had hit the doldrums. With regard to housing development I am a pragmatist: I supported Notting Hill’s role in promoting shared ownership, and have had a long-held interest in providing homes in the ‘intermediate’ sector as well as for those most in need. As a Board member I supported tentative moves into highly profitable private development because it could be used to cross-subsidise an increase in social rented homes. It was a time when grant for social housing was substantial and the Brown Government had increased the budget considerably.
But the Trust came to be dominated by a philosophy which saw social renting as something to be disparaged, a ‘dead end’ and a route into ‘dependency’, and which also placed home ownership on a pedestal called ‘aspiration’. Provision of social rented homes was downgraded in priority, there were moves into making tenancies conditional (eg on seeking work), whilst more and more effort went into shared ownership and private development. There were skirmishes at the Board over individual schemes where the proposed balance between social rent and shared ownership was weighted in favour of the latter even though the finances of the scheme seemed to allow for more social renting in the mix.
It came to a head in early 2008 when a new 5 year development programme was put before the Board. It was fully costed, certified by the Director of Finance as a credible and viable plan, and it reflected in full the policy of the then mayor, Ken Livingstone, that development should be 50% affordable (35% social rent and 15% intermediate). Having drafted Ken’s housing strategy, I was delighted that NHHT planned to follow the lead. But the proposal was withdrawn by the chief executive and a different strategy was brought to the next Board. The amount of shared ownership was significantly increased and the share of social rent significantly decreased. After a long and difficult Board meeting, where I was an isolated advocate for the first strategy, the revision was passed (as I recall) by 8 votes to 1. The mix in the programme was proposed to shift from (social rent: intermediate) 70:30 to 40:60, much more extreme than even the policy of the incoming mayor Boris Johnson (although still much better than now).
I resigned. In my (July 2008) letter to the Chair, a clever businessman who helped improve the Trust in many other ways, I commented:

I cannot support the Board’s decision to approve the strategic plan proposed by the Corporate Management Team and the underlying attitudes it reflects. The basic premise of the growth strategy is that NHHT should make ‘shed loads of money’ from private development, which can then be applied to meeting housing needs.  But this argument falls if CMT and the Board then decide to provide many fewer social rented homes than could be provided within reasonable business parameters.  Real choices were available in deciding the strategy – and the final decision reflects serious differences of principle.  In short terms, I feel that NHHT is fixated with promoting home ownership and has insufficient commitment to meeting housing need.
Any reasonable analysis of housing need in London shows that the highest priority is for more social rented homes.  Of course other objectives come into play, and I have consistently supported mixed development and intermediate housing options .………  Compared to the first version of the corporate strategy in March (which was also recommended by CMT), the revised strategy would produce 1,500 fewer homes for social rent over 5 years.

Externally, Kate was often heavily involved in policy development and lobbying. Amongst other things, she was a key advisor to the extremely influential Localis review (Principles for Social Housing Reform) on which Red Brick has commented many times (for example here). She chaired the ‘Housing and Dependency Working Group’ for Duncan Smith’s (misnamed) Centre for Social Justice producing a report – using NHHT resources – on housing poverty in 2008, where she repeated her call for an end to security of tenure and criticised social housing for providing ‘low cost living for life funded from the public purse’.
Of course Kate is fully entitled to hold her own views and to pursue them as she wishes. In many ways she is very good at her job. But the antagonism to social renting affected both what NHHT was doing and what it was saying to Government as a prominent housing provider. For example, in 2006 I managed to get the Board to agree not to submit draft evidence to the John Hills review on the future of social housing because it supported tax relief for first time buyers (without evidence) and because it called for the ending of security of tenure for social tenants and higher rents. My view was that the proposed evidence stigmatised tenants: social housing was described as ‘subsidised’ whilst shared ownership was not; tenants were seen as second-class citizens who needed ‘a springboard back into society’; social housing was a ‘dead end’ where lives ‘stagnate’. Home ownership was seen as the miracle cure for social ills.
It has become fashionable once again for leaders in UK housing to describe in graphic terms the rise in homelessness and the appalling degree of housing need in our country. But the industry has an awful lot to feel ashamed about and failing to defend social rented housing is top of the list. People should be held to account for what they did when the money was available, what they have advocated for as individuals in public debate, and, crucially, how they used the platform and resources provided by their organisations to promote their views. One article does not wipe the slate clean".
Posted by John Gray at Monday, January 16, 2017