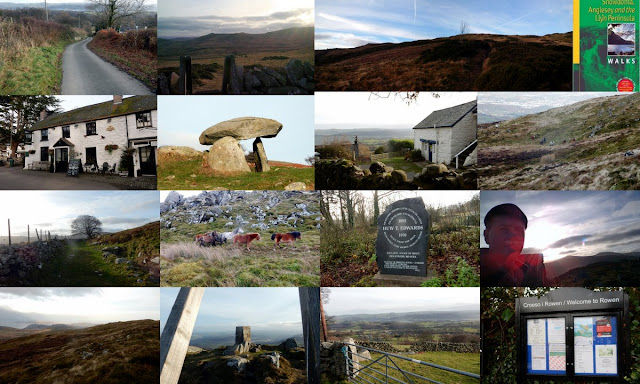 Off message but over Xmas, Gill and I went on a marvellous walk in North Wales. Tal y fan is the lowest mountain in Snowdonia at 2000ft (610m) and an ideal introduction to climbing mountains. It also follows an ancient Roman road, passes prehistoric monuments and a remote medieval church. It might be relatively easy compared to other Snowdonia mountains but it is not a walk to be attempted in bad weather if you are not experienced in using a compass.

The walk starts in the lovely village of Roewen with a steep vertical ascent along a former Roman military road. It is quite tough but the views get better and better as you go up. You pass ancient burial chambers and standing stones.

The summit of Tal y fan is steep and rocky which requires care but the views from the top are magnificent.  Since it was a little late in the day we cut the walk short by going off the suggested "pathfinder" route and headed across the ridge towards Conwy.

A herd of wild welsh mountain ponies ran past us. A fellow walker who passed by said these ponies were descendants of Roman horses who used to work in the local mines and quarries.

Going down the mountain back into Roewen was difficult since it was cold and slippery but we managed to keep upright.

This is a walk we will repeat again in a different season and will no doubt enjoy it as much then as we did last month.
Posted by John Gray at Sunday, January 22, 2017