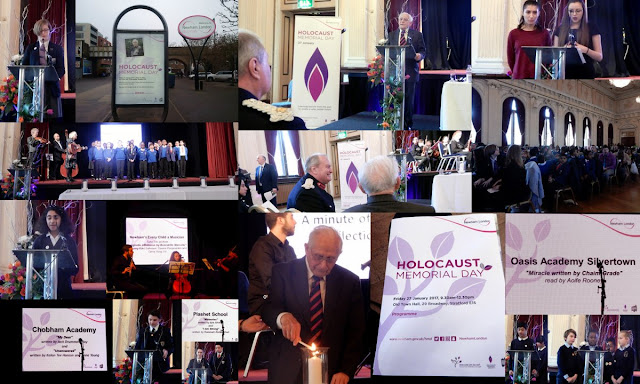 On Friday I attended a very moving event to mark "Holocaust Memorial Day" which remembers the attempt by German Nazi to murder all Jews in Europe and all subsequent holocausts in Cambodia, Rwanda, Bosnia, Darfur and now Syria.

The wonderful guest speaker this year was the childhood survivor of 5 Nazi concentration camps, 90 year old Harry Olmer. I had tears in my eyes for much of Harry's speech. I also really appreciated the the wonderful moving music, songs and poetry of local Newham school children.

Democracy, free speech, decency, tolerance and respect for differences is so important and worth fighting for. Harry stood next to a man in a concentration camp who was shot dead by a Nazi for no reason other than that they were both Jews. He does not know why he survived and so many did not.

"The victims of the Holocaust and other genocides across the world were remembered at a special event today (Friday 27 January) attended by Mayor Sir Robin Wales, and Holocaust survivor Harry Olmer. More than 400 people including schoolchildren and local residents attended Newham Council’s annual event at the Old Town Hall, Stratford, to mark Holocaust Memorial Day. Candles were lit, a minute’s silence held and there was also a performance by Newham’s Every Child a Musician Orchestra.

As part of the event, 90-year-old Harry Olmer outlined his memories of the Nazi persecution of the Jews during the Holocaust and shared his experiences which included surviving five concentration camps – including Plaszow near Krakow which later became famous in the movie Schindler’s List. He was also forced to work in a munitions factory filling shells with explosives and last saw his mother and sisters after he, his brother and father were separated from them in 1942.

Harry, who was one of six children, was born in Sonsowiec, Poland, in 1927. He told those at today’s event that one of his earliest memories of the war was from 1942 when 650 people were taken to a wood and shot. He said: “I was in a truck with a lot of other people and could hear the shooting. We had a woman who started screaming, so they stopped the truck and shot her. They separated all the women and children, and they were put on wagons and taken away. That was the last time I saw my mother and my sisters. The trains took all the women and I did not have time to say goodbye.” Harry, a retired dentist, is now one of a handful of Holocaust survivors who visit schools to tell their stories.

He said: “People say it can’t happen again but it did, in Cambodia, in Europe, Serbia and now, as we are seeing, in Syria with Aleppo. That is why I talk to the schoolchildren, so they can hear the story. It is my story, it is a living history.” Harry also took part in a question and answer session and received a standing ovation after his talk. The theme of Holocaust Memorial Day 2017 was How can life go on? with candles lit at the event in memory of those who lost their lives during the Holocaust and other genocides".
Posted by John Gray at Saturday, January 28, 2017