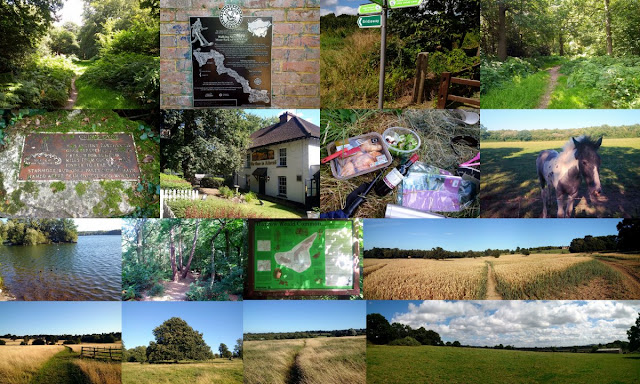 The last one I did in 2016 was the 12 mile "Moor Park to Elstree" walk on 7 August, which was actually one of the nicest and prettiest walks I have done.  The London Loop is a fantastic way to explore the hinterland of our capital city.

Started off from Forest Gate station to get to Moor Park underground station took about one hour. All the London Loop walks start and finish at points which are accessible by public transport. You can use your London Transport "Oyster Card" to reach nearly all of them.

At the start of the walk in Moor Park there is a rather boring stroll across a golf club and roads but soon you enter Oxhey Wood which is really lovely. Later on you come across some great views of London and Harrow on the Hill and more pretty rural scenery before you cross the Euston to Scotland railway line.

After going across yet another golf club you come to the remains of "Grims Dyke" which I have never heard of before but was once some sort of 100AD boundary earthworks stretching out for miles.  Soon afterwards you walk past the lake that the W.S. Gilbert of the Victorian light opera partnership, Gilbert & Sullivan, "mysteriously" drowned there in 1911.  It was a bit unkempt and creepy.

Next was Harrow Weald, which use to be a 19th Century common where locals had the right to quarry gravel and supply clay for brick kilns. It must have been a major industrial area in its time but now although marked by such activity, nature is fighting back and reclaiming the countryside.

Then a lovely countryside walk past RAF Bentley Priory, which used to be Fighter Command Headquarters in the "Battle of Britain". After some road work next was Stanmore Common, take the path under the M1 and walk through Aldenham Country Park. The reservoir in the park was first built by French Prisoner of War in 1795.

The last bit was mostly road with some nice country bits.

Elstree is quite a interesting town with some good pubs and restaurants. It took just over an hour to get back to East London by tube and overground.

Overall this walk was very good and recommended. I am determined to finish the London Loop this year.