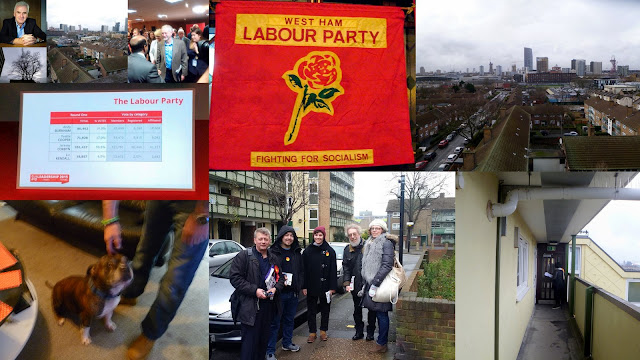 On Saturday ward members from West Ham branch went out campaigning in Paul Street E15. We had 2 newly active members out with us for the first time ever "on the knocker".  They seemed to enjoy it - talking to residents, mastering the art of using the "drop key" to open entry doors, the rain and even the prospect of meeting "Buster" (a huge Staffordshire Bull Terrier - who is actually as soft as butter) did not faze them.

West Ham Constituency Labour Party now has a staggering 1264 members (and hundreds of affiliated and other supporters). 251 members are under the age of 27. This is amazing growth. In 2009 we had only 423 members and even in 2014 (year before the general election) we had just 689.

While I will not agree with all that the new members may say or believe (just as I don't agree with many of the existing members) at the risk of being a patronising git - I think that it is great to have people interested in politics who want to change the world, joining and taking part in the Party.

The Labour Party is going through a difficult period of adjustment and is still bitter about defeat but the new leader, Jeremy Corbyn, has kept the Party together and he must be given his chance to succeed. We will only win power if we remain a coalition of democratic progressives, left and centre left. That doesn't mean mind that the Party cannot re balance British politics towards the left - both locally and nationally.

To bring about change, the new members will have to participate in all the boring party structures. Branch meetings, Executive committee, General Committee, Local Campaign Committee and affiliate meetings. They will also be expected to canvass and deliver leaflets. They will have to be disciplined, organised and be prepared to turn up and argue their case and to vote for the motions, officers and the representatives they want.

Being a life long collectivist, I would also hope and expect them to be collective, pragmatic and to seek consensus whenever possible. Lets see if a "new kind of politics" will actually work in West Ham.
Posted by John Gray at Tuesday, January 12, 2016