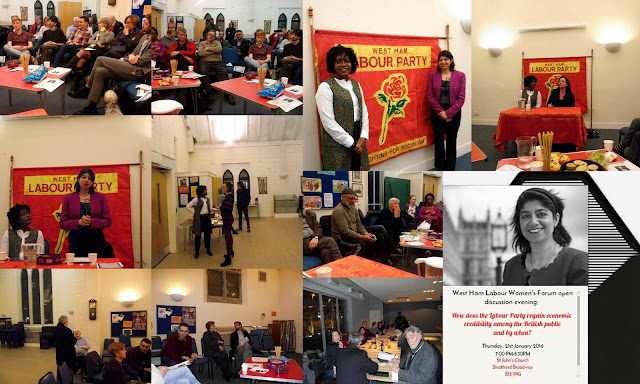 The theme of the meeting was:-

This event was organised by our Women's Officer, Seyi Akiwowo and was open to men and women. Seema got held up with London Underground problems, so our local MP, Lyn Brown stepped in for a Q&A until Seema arrived.

When she did arrive she pointed out that the awful delayed 2 hour journey she had experienced showed the need to get a London Labour Mayor in charge of transport!

Seema spoke about Labour values and directions. Labour in a future government would think differently and be long term. There is an alternative economic policy. The Tory cuts are the wrong type of cuts and what we want is to see the economy growing and the government getting more taxes in. Women had paid the biggest price from this governments cuts. She also supported small businesses as the backbone of the economy and had herself grown up in a flat above a small family business.

Seema is a "safe pair of hands" as Shadow Chief Secretary - sensible, confident, quiet but firm. Afterwards we went off to Jerrys, a local cafe for some drinks and snacks.
Posted by John Gray at Sunday, January 31, 2016