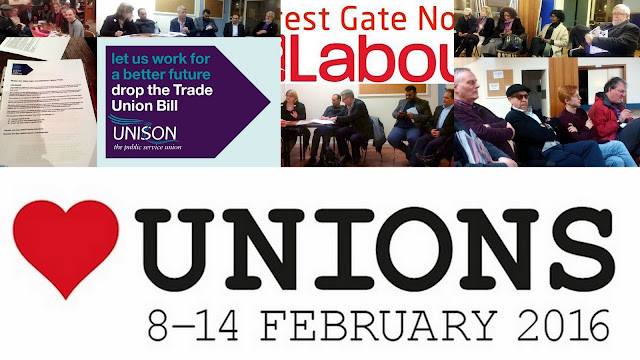 On Thursday evening I was invited to speak to a joint meeting of both Forest Gate Labour Party branches on the Trade Union Bill. It started off with a quiz on trade unions, which was an excellent ice breaker and introduction. I then spoke about trade unions and the Labour Party and how the Tory Trade Union Bill (which tomorrow will have its 2nd reading at the House of Lords) is not only undemocratic and authoritarian but will actually worsen industrial relations.

I spoke in my personal capacity. There then followed a wide ranging question and answers session. I think people understand the argument that you need to have a strong union in the workplace to ensure that workers are treated with dignity and respect.  Employment law is important but many workers over estimate their legal rights at work. It is a safety net only and the best protection in work comes from your union.

Unions have been in relative decline following previous Tory legislative attacks since the 1980s but recently this has stabilised and there has been some growth. Unions still have over 6 million members and we remain by far the largest civil society organisation in the country.

The new Tory Trade Union Bill attacks union funding and it will make it more difficult for strikes to take place, but strikes are already at all time low level. There was more strikes during the the second world war than in recent years. If legitimate calls for strike action are outlawed then it is likely that "unofficial" action will take place instead. Allowing agencies to provide "scab" labour to replace strikers will result in industrial mayhem.

Unions must have a realistic ability to call out its members on strike (as a last resort) in order to give them bargaining power with management to ensure that any negotiations are meaningful. Unions re- balance power in the workplace in favour of employees and away from a too dominant management.

If the Tories really wanted to modernise unions, as they claim, why don't they allow on line voting or workplace ballots? Why is it alright for the Tories in London to pick Zac Goldsmith as their Mayoral candidate on line by computers or mobile phones but not allow union members to make any decisions on line?

Why is it acceptable that MPs, Councillors and Police Commissioners are elected with very small turnouts but union ballots would have to have a say 80% majority on a 50% turnout.

The Bill will also attack trade union funding of the Labour Party, while doing nothing to stop Tory funding by hedge funds and financial services. This will destroy a political convention that Governments should not misuse their power to stop funding for their opposition. It will also interfere in the rights of employers to make their own agreements with trade unions.

Quite rightly it wasn't a trade union "love in" and I will be the first to admit that trade unions are not perfect and we need to change and update. We need to look again at the traditional Anglo-American model of trade unionism and look to countries where there is greater union density and influence.

In response to a question about many workers don't think that unions are relevant in their workplaces. I agreed that is true. Many workers are Thatcher's grandchildren and know little or nothing about unions and don't understand its importance. One of the worse things about being a trade union rep is turning down sometimes pretty desperate requests for support at work from colleagues, who have not joined the union. Unions need to explain themselves better but also we need to make unions more relevant to workers.

Trade unions and the working class in this country have traditionally bought themselves economic and social benefits by the ballot box. The Labour Party was formed in the first place by unions since we needed political support to protect us from Tory laws, hostile employers and the courts. We desperately need a Labour Government in power but we also need the next Labour Government to help make unions more relevant in the workplace. If unions had more power in the workplace, then more workers will join.

The Labour Party needs trade unions not only for the money but also to achieve its historic mission of greater and fairer equality.  In the book "The Spirit Level" you can see that countries that tend to be more successful and have greater equality have higher levels of trade union membership.

Stronger trade unions will not only result in greater fairness in work but will result in a greater share of wealth going to the many and not the few. The decline in trade unionism has been mirrored by a decline in real wages and a concentration of wealth and greater income inequality.

There has already been some "improvements" in the Bill during its passage in the Commons such as the really stupid requirement for unions to give 2 weeks notice of any social media announcements. What we need now is to keep up the pressure while it goes through the Lords.

Finally, I pointed out that whatever happens, unions are here to stay and we will not be going anywhere.

(Many thanks to Heather and Rachel for organising this event).