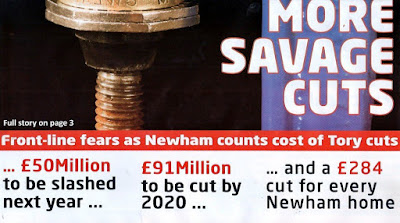 In between Christmas and New Year I was laid low with the lergie so stayed in and managed to finish off inputting the "marked register" data for the ward onto the Party database "Contact Creator" for the 2015 General Election.

The register is an actual copy of the list of voters eligible to vote and records whether or not they did vote. Political parties have to pay for copies and of course, they don't know how the vote was actually cast.

This is one of the most boring and frustrating tasks going but it is important to know who actually turns up to vote. The list they use at polling stations does not fully coincide with the actual register so it is a bit of a hair pulling nightmare to complete.

I started my 2016 political (and personal fitness) campaign this morning delivering Sadiq Khan for London Mayor leaflets and a Labour tabloid to West Ham housing estates.

Not a very cheerful message in the newspaper as Newham faces further savage cuts to its budget of £91 million.

We need to make sure that our residents understand that it is the Tories who will be slashing Council services by cutting funding. This is also why the launch of the "Newham United Against Austerity" campaign on Saturday 30 January 2016 with keynote speaker, John McDonnell MP, is also so important.

Austerity is an unnecessary political choice that the Tories are making. Cut the deficit by increasing taxes on those able to afford it and not by cutting services to the vulnerable. Labour has so far failed to effectively counter the Tory media myth that there is "no alternative" to Austerity.  There are always choices and alternatives to be made in politics. We need to get this crucial message out.

Today train and bus fares went up again by more than inflation. On Monday morning (and evening) 4 January 2016 West Ham CLP activists will be out at railway stations protesting and handing out leaflets to commuters reminding them that :-

"In the last seven years, tube and bus fares have increased by more than 40 per cent, while wages have failed to keep pace.

That's why Sadiq Khan, Labour's candidate for Mayor of London, has pledged to freeze all tube, train and bus fares for the next four years".

Getting Sadiq elected as a Labour Mayor for London is going to be a key part of any wider Labour revival. I hope (and expect) that all parts of the Party who actually want to defeat the Tories will stop the name calling and bickering and rally around Sadiq and Jeremy in the run up to May.

Hat tip to Mrs Grayee for her support with inputting and leafleting!
Posted by John Gray at Saturday, January 02, 2016