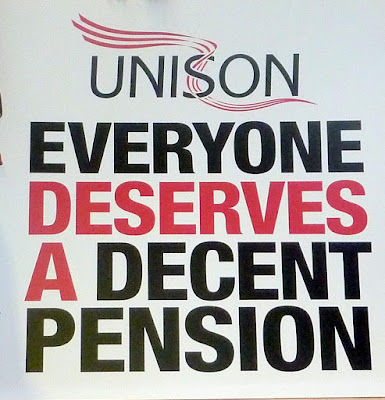 Check out this response to amongst the daftest report ever by a right wing think tank.

It is more than a shame that organisations such as the Centre for PolicyStudies (CPS) feel they have to temper their reasoned attacks on the financial services industry for ripping off the Local Government Pension scheme (LGPS) with such bizarre sectarian silliness.

The Local Government Pension Scheme unlike all the other public PAYG funds has collectively some £200 billion of assets and face liabilities over a 60 years or more time frame. There is no crisis.

If we were not being cheated by the financial service industry there would be no real affordability issues with the LGPS. If we also did not have such a weird and broken yardstick of measuring LGPS liabilities then nearly all our funds will be in surplus.

Why don't we open the LGPS to all UK workers including the self-employed? Everyone deserves a decent pension and unless you are rich nearly all alternatives to a defined benefit pension scheme just will not deliver.

“UNISON fundamentally disagrees with the conclusions of this report. The LGPS is both safe and sustainable – being funded both by contributions from scheme members, employers and investment income.

“Scheme investments generate a significant portion of the income so the taxpayer is not paying the full increase in employer contributions. The report misses the fundamental point that if the cost of benefits increases, that increase is shared with scheme members.

“Scheme benefits did not improve in April 2014 as the report claims. It was fully costed to be lower in value, and the build up rate is higher now because retirement age has increased.

“It is not that the current LGPS is unsustainable that has caused past service deficits to build up.  Messing around with current benefits will do nothing to reduce the deficits caused by employers paying in too little or taking contribution holidays in the past.

“UNISON takes the issues on costs and governance seriously and has around 200 trained members on fund boards who push for greater transparency on scheme costs.

“This doom and gloom report implies that there will be no recovery in UK investments and that yields will never recover, whereas we know that although there are always ups and downs, the indicators are that markets will recover.

“It is over prudent assumptions on growth that is killing the pensions future for workers all over the UK, and giving rise to the fiction that adequate pensions are unaffordable.”