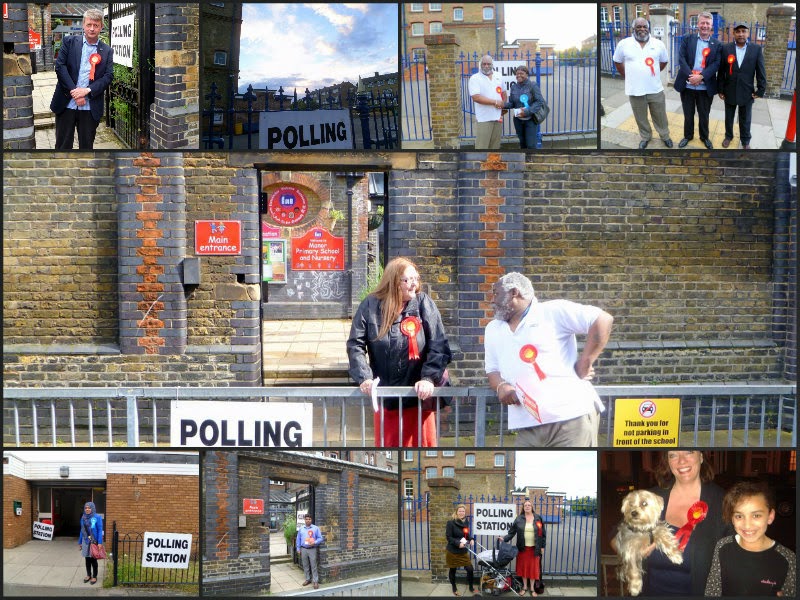 This post is about my day as a Labour Councillor candidate last Thursday on Election day.

In the morning it was blue skies & sunshine. It was quiet but there was a steady flow of voters. I went and introduced myself to the Presiding officer and staff at Church and then Ranelagh school.

We are allowed to speak to voters outside the school gates, ask them to vote for us and offer a leaflet. After a stream of "Don't need to ask, I'm voting Labour", "Labour all the way", broad grins, thumbs up and even pats on my back, I had one women shout at me that she wouldn't vote for Labour, she was a real socialist and we should shoot that **** of a leader. I wasn't sure if she meant Ed Miliband or Robin Wales but I responded by telling her that we did not want her support and that she is barred from voting Labour! When she came back she seemed to have changed her mind somewhat and said a cheery "Good luck anyway".

After 10am there was a lull and I had a full English breakfast with Freda at Solmos cafe. John had to go to work (he is a teacher at a FE college and could not take the day off).

I didn't have a conversation with Farahana (see photo collage) who was the Asian British female Tory candidate but did speak to her friends and family who were supporting her (none of whom lived in Newham). It was clear that they were not actual Conservative Party supporters. They would support Labour during the general election but felt that in Newham the local Party leadership was arrogant and would not listen to their concerns.

The 3rd Tory candidate was Mary (see photo collage) who was far too nice to be a real Tory and admitted that she had been "volunteered" to be a candidate.

Unlike elsewhere in the borough, where there was disgusting Respect style intimidation and violence by so called "Conservative" supporters, the West Ham ward "Tories" and their supporters were friendly and pleasant. A little over enthusiastic at times and strong believers that they could convince voters to support their cause at the door of the polling station.

I accepted a soft drink from one of the Tories and posted on Facebook - is this "treating" and does this make me a class traitor?

Some of the voters were rather direct and rude to the Tories. In particular those who were suffering from the impact of the bedroom tax.

The weather changed and it poured down for a while but then cleared up.

We had a number of local Party volunteers to fly the flag outside polling stations including Veronica and her baby! Normally I would not have spent all the time on polling stations and instead would be "knocking up" Labour supporters and reminding them to vote. However, we decided to keep an eye on the Tories. I also "stole" top UNISON canvasser, Montrose Matty (white tee-shirt) from Plaistow North ward to help keep them in line.

Monty and I noticed that the family supporters of Tory candidate Farahana were encouraging people only to vote for her "number 5"on the ballot paper. We decided to helpfully pass on this information to the other two Tory candidates. This caused some upset in the "blue" team.