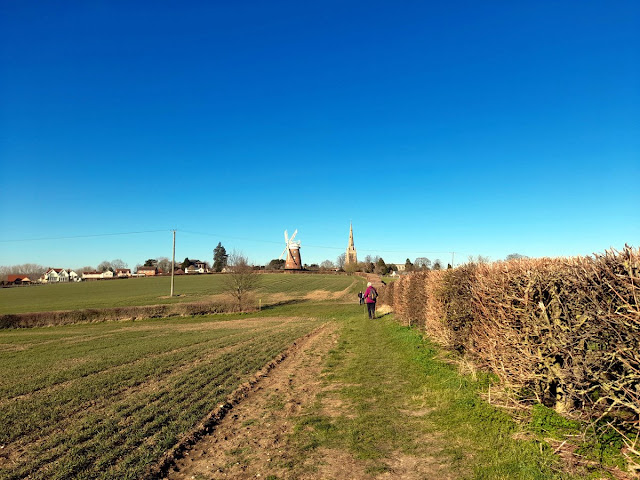 Gill and I returned today to Thaxted in Essex to follow this 6.5 mile  circular walk from our old version of the local Pathfinder Guide. We did this walk previously in 2014.

Today was a lovely tramp through largely quiet countryside but had no great challenges.  There was however noise from planes passing over to land at Stanstead airport.

The weather was lovely, with blue skies and sunshine but a cold wind. We hardly saw anyone during the walk. There were a number of my favourite ancient enclosed green lanes. Some paths were a little muddy but if it had been wet, you would need to wear wellies or gaiters.

In 2014 I posted here on this walk that a past priest of the amazing Thaxted church, was known as the "Red Vicar", who use to fly the Red Flag banner of the Soviet Union and Shin Fenn, inside the church and then had to be protected by dismissed Police strikers from outraged locals.

On the way back we stopped off at the 15th century timber framed Guild Hall and noticed a remembrance plaque to local men, who had died in the first and second world wars. Apart from noting that 55 killed during the first world war, compared with "only"10 in the second. You can see that liberty and freedom can some times come at a terrible price.

Gill noticed that the names of a "John Gray" and a "Walter Gray" were recorded on the plaque as being killed in action during the first world war. It would appear from my internet searches that both of them were local young men who were killed in 1917 and may have been related but were not siblings.

After a pleasant drink in the local "Swan Pub" we drove back to London, listening to the dreadful news updates on the vile and fascistic invasion of brave Ukraine by Russia and its foul dictator, Putin.