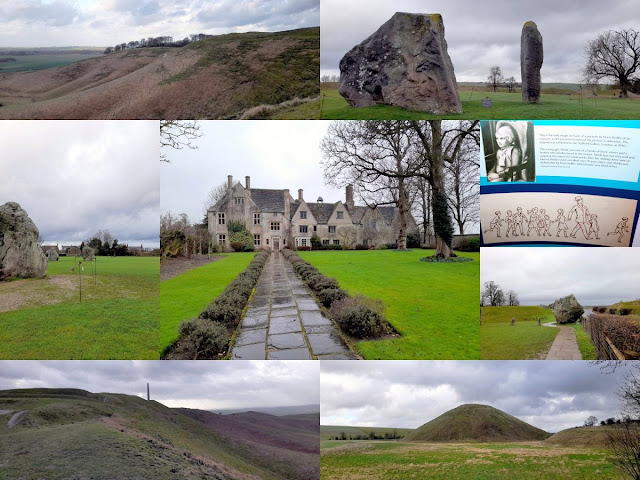 Despite the storms, we are back from a lovely weekend in Marlborough, Wiltshire. On Saturday Gill and I visited nearby Avebury World Heritage Site. An amazing experience to see all these simply huge standing stones, some weighing many tons, built thousands of years ago and a massive deep circular ditch nearly a mile in length. Dug out of the local chalk with animal bones and anklers.

Afterward we visited Silbury Hill (bottom right of collage) which is yet another breathtaking ancient Neolithic Britain site which, 30m man made hill which must have taken huge effort and resources to build but no one nowadays really knows why our ancestors did this?

Despite the aftermath of storm Eunice wind and rain, we were able to go for a short walk along Calstone and Cherhill Downs. It was a hard, slippy climb up and super windy on top but fantastic ridge views and we walked around the "Cherhill White Horse" site.

The central picture in the collage is of Avebury Manor (National Trust) which is well worth a visit but I noticed a mention there in information panels that in September 1939, a number of children from Custom House, East London (my part of the world) were evacuated there because of the fear of German bombing including "Sheila" (see painting by Doris Kellier). Shella was not well and stayed there longer than her siblings. I wonder what happened to Sheila and will ask Newham History Facebook if they know.