1st anniversary of the coup in Myanmar - TUC Statement 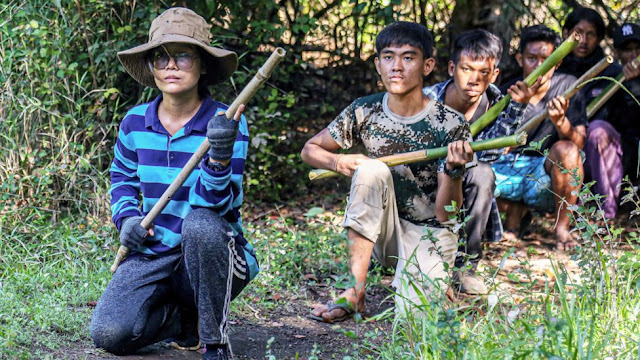 Picture from this BBC report on young people training to fight the vile military dictatorship in Myanmar. Below is TUC statement. It is good to see that Total are withdrawing their operations in Myanmar. Not so 14 years ago. I must find out which garment companies are still investing there. @TomPowdrill - any thoughts?

"1 February 2022 marks the one-year anniversary of the seizure of power of a military junta in Myanmar, deposing the legitimate government in a coup d’etat. The TUC expresses our admiration for all the democratic forces, including the trade union movement, which have bravely resisted the military at great cost to themselves.

We warn against any normalisation of the illegitimate junta and reiterate our call for diplomatic recognition of the National Unity Government in its place. We also echo the calls of the international trade union movement to target the military government economically. In particular, by placing embargos on the sales of arms and aviation fuel to the Burmese military and cutting off its revenues by refusing to purchase Burmese oil and gas.

We welcome the decision by Total and Chevon to withdraw from their operations in Myanmar - and urge all other oil and gas stakeholders to do so too.

To private sector enterprises in the garment trade, including several British brands, who purchase stock from Burmese textile factories, we raise the issue of the human rights abuses, political violence, and union busting taking place in these factories, communicated to us by our Burmese sister centre, the CTUM.

We believe, based on the information provided to us by the CTUM, that any realistic assessment of whether companies can actually exercise human rights due diligence in their supply chains, including by protecting the trade union organisations in the factories, will show that it is currently impossible to meet the obligations of the UN Guiding Principles on Business and Human Rights. That being the case, companies should cease all new orders and make arrangements to withdraw their business in a responsible manner".