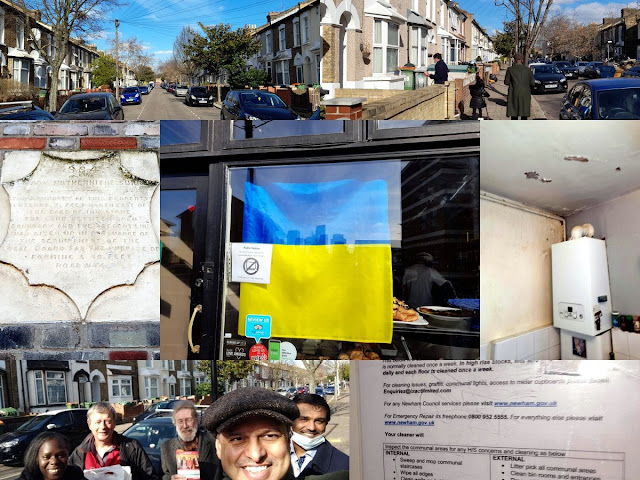 This morning we went on a Street surgery in my ward with fellow councillors and local members. It was a lovely day, although a little cold but blue skies and sunshine. It really felt like spring is just around the corner.

The surgery itself went well, residents were on the whole very pleased to see us.  We had a number of interesting conversations with passionate and informed residents about local services, council policies and wider politics.

Including one resident who proudly said he had never voted in his life (in his 60s I guess) since "all politicians are the same and they are all corrupt". I begged to differ that we are not all the same and explained why. He was polite and listened but I am not sure it will change his mind, but it might.

I picked up case work about replacement block keys, a damp problem in a kitchen and a landlord who appears to be not keeping to his licence conditions. There was also a young tree which was blocking the footway and was either blow down by storm Eunice or perhaps hit by a car.

I rang one modern looking door bell and was asked by it to leave a voice message - which is a first.

We came across a fascinating local history boundary plaque on a wall (middle left of collage) which I have meant to research further for many years. It seems to date from 1884 and despite being worn my understanding is that this area was once "owned" by St Mary's Church in Rotherhithe.  There is another movement nearby in Stratford. I will post in Newham History Facebook site to find out more.

Afterwards some of us were able to go to the Sawmill cafe in Stratford for coffee and a delicious shared cinnamon bun. The family run cafe is run by young Ukrainians and we went to show out solidarity and support (the Ukrainian flag was proudly placed on their window).

The staff were obviously very distressed and said they could not understand how these things could happen like this in Europe in 2022. Nor could I.