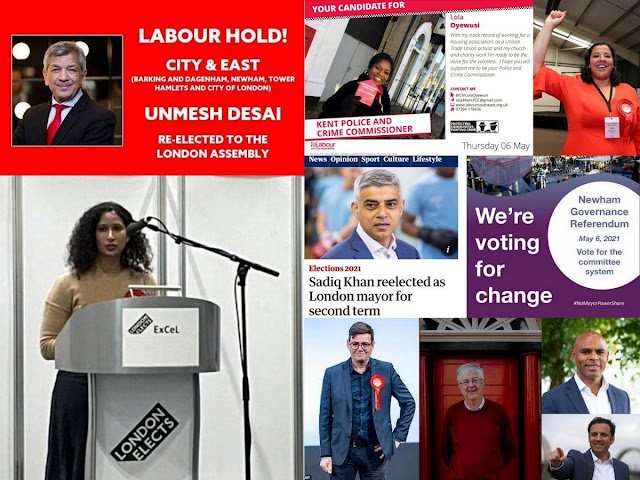 Now I have had some time to recover from electioneering and reflect upon last Thursday 6 May - some thoughts:-
Congratulations on Sadiq being re-elected as London Mayor; Unmesh re-elected as our local City & East Assembly member and Farah winning the by election in East Ham Central with over 52% of vote. Newham turnout was 35% which is by any standards unacceptably poor. We did not get out the Labour vote in Newham that we should have had.
The Newham democracy referendum on replacing the Executive Mayor with a Councillor run committee model was lost by 44% to 56%, which is a shame but the narrow majority shows the concern felt by many residents about such governance arrangements. I supported the "Newham for Change" campaign and hope it will continue to argue for greater democracy and transparency in government, both locally and nationally. Certainly we should support the opposition to the Tory led referendum in October to change Croydon Council into a Mayoral system.
My UNISON colleague Lola came second in the Kent Police and Crime commissioner election, doubling the Labour vote from the previous election & having the highest single candidate vote Labour has ever had in Kent.
I was so pleased that Wales kept "Red" and Labour had one of its best ever assembly votes despite the very high Welsh brexit vote. Unlike the dreadful by election outcome in Hartlepool.
Welsh Labour shows that we can win back our traditional working class base with a left of centre pragmatic socialist programme (and working in partnership with trade unions).
Labour did well in many areas but overall it was not good and we need to get much better, we need to unite around Keir and get our policies across better.
I did suggest at a recent meeting of UNISON Greater London Regional Council officers, where we compared the strong support for Labour in our region and the principality, that perhaps London ought to consider leaving the UK and forming a political union with Wales? It was just a thought....
Posted by John Gray at Thursday, May 13, 2021

"We can win back with a progressive centre left socialist policies".... dream on. You had the worst general election result for more than 100 years and now a crushingly bad by election and council results half way through the Tories term, but your answer is more of the same medicine?... did Hartlepool tell you nothing?
Greens are the new centre Left Party of choice.

Nope, I don't think so. The Labour vote recovered slightly from 2019, we did very well in Wales and in most Mayoral contests. We will reflect, change and then slowly recover. First past the post means the greens have no chance I am afraid.

I think you are wrong. There have been 8 Labour Party leaders in the 45 years since Callaghan was PM and only one of them has managed to win a general election. Labour have been wiped out in Scotland and are crumbling across the whole of the North. As an example Labour councils lost to the Greens in Bristol and South Tyneside yet we are into a decade of Tory rule? You had the worst general election results for 100 years and now half way through Boris's term you are going backwards... and fast.
Sure you will hang onto some of the Metropolitan areas for a while but the tide hasn't just turned its flooding out, and whilst you talk about building back you seem unaware of the terminal decline that Labour is in. You are way out of touch. Lose the intelligentsia to the less angry and more intellectual Greens and you are finished. That's the way it is going.

Wait and see. Labour has been written off before and has always come back. FPP (which I oppose) means that the Greens have no chance of becoming a serious challenge. In my view for what it is worth.