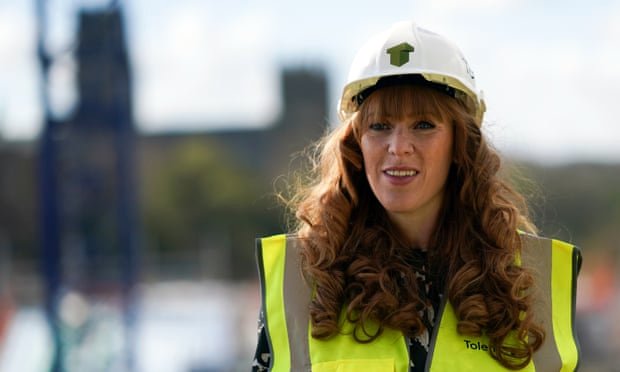 End of lockdown a chance for people to reassert control, say Frances O’Grady and Angela Rayner

People will have an opportunity to wrest back control over their working lives when the country emerges from the pandemic, but the government must do more to help by immediately outlawing practices such as ‘fire and rehire’, prominent trade union and political figures have said.

“The pandemic has raised these pretty profound questions about our values and it’s held up a mirror to Britain on inequalities that were there long before, but have been magnified by it,” O’Grady said.

“It is a chance for us to say: ‘Do we really think it’s right that all the risk is on the shoulder of the workers and that people who do the most valuable work very often get paid the least?’”

Rayner attacked the government for failing to deliver the promised employment bill that ministers had indicated would secure the rights workers have enjoyed during the UK’s membership of the EU, saying its absence “exposes the gaping hole between Tory rhetoric and action”.

She said: “Coming out of this pandemic, there is an urgent need for stronger employment rights and protections, yet without a bill the inequality and injustice that exists in our economy as a result of the Tories’ failure to protect working people will only get worse.”

Millions of people have seen fundamental changes to the way they work during the pandemic and that has led many to reassess how they want to work in future – as well as how they value the work of others.

There was widespread condemnation of government plans to offer only a 1% pay rise to NHS staff in England this year. And there are calls to broaden the definition of key worker to include, for example, the supermarket staff who helped keep a locked-down country fed – and to give them priority access to cheaper housing, as well as a living wage and better working conditions.

“If we really want to thank key workers, show that through their pay packets,” O’Grady said.

Key in any revision of the way the country works, O’Grady said, must be to increase and broaden statutory sick pay, which she said has proven insufficient to allow people on low pay to self-isolate for the good of the public.

For years, the government had identified a pandemic as one of the biggest risks facing the UK. National security would be threatened by maintaining statutory sick pay at a level that did not allow everyone to self-isolate if needed, the TUC’s head warned.

O’Grady said she was optimistic people would use the experience of the past year to assert greater control over their working lives, stressing that the focus would need to extend far beyond simply allowing city-based office workers to work from home.

People in all types of workplaces could benefit from being able to fit work around their lives, including by gaining the right to regular hours, more job-sharing and flexi-time, as well as greater freedom to swap shifts, she said.

O’Grady added: “The trick is realising we can only do that collectively. And that’s the challenge, which I’m optimistic about.” While she called on workers to use the trade union movement to help win such rights, both O’Grady and Rayner said the government had a major role to play.

The Department for Business, Energy and Industrial Strategy said it was “committed to protecting and enhancing workers’ rights”. A spokesperson added: “In the past year alone, we have taken vigorous action, from introducing parental bereavement leave, to protecting new parents on furlough, to giving millions a pay rise through a higher minimum wage.”

However, the minimum wage is still well below what campaigners say is needed when measured against the cost of living.

The spokesperson added: “The government is committed to bringing forward an employment bill to further protect and enhance workers’ rights to build a high skilled, high productivity, high wage economy that delivers on our ambition to make the UK the best place in the world to work and grow a business.”

But Labour’s deputy leader cited the example of fire and rehire, under which staff are forced to accept worse conditions in order to keep their jobs, as one area where ministers must do more, calling it an “appalling and bullying practice”. The prime minister has denounced it as unacceptable but Rayner demanded that he “outlaw it without any further delay”.

She added: “For years, many companies have used bogus self-employment to deny their workers sick pay, annual leave and other basic protections, in arrangements that are specially designed so companies can dodge their legal and moral responsibility to treat their staff with dignity and respect.”

Both women agreed that the shared experience of the pandemic should be the catalyst for fundamental change".