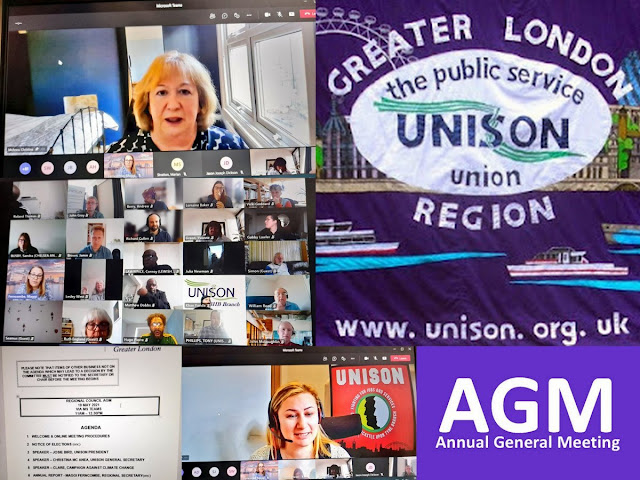 Today was the Annual General Meeting of the UNISON Greater London Regional Council. It was held virtually with a shortened agenda but mirrored what happened when we had past physical meetings (sort of).

UNISON is the largest union in London with around 130,000 members. I was pleased to be re-elected unopposed with the rest of the Regional Convenor team this year (and last year).

Our elected lay National President, Newcastle Council worker, Josie Bird, was our first key note speaker. Josie spoke passionately to the AGM about the contempt this Government treats the working class & the personal difficulties, she and many others had experienced in "lock down" home schooling her children while trying to carry out a demanding job.

As a UNISON NEC member I have been present at a few meetings being expertly chaired by Josie when her very young son has decided to join his Mum on zoom! It didn't happen today.

Out next speaker was our  new UNISON general secretary, Christina McAnea who
thanked all UNISON public service members & activists for their work during #COVID19.

Also, despite being from Glasgow, she has now lived in #London for longer than anywhere else, and she had been so pleased to get support of this Region in her election.

After a speaker on the vital importance on Climate Change, there was the regional annual report, my financial convenor report, motions (all very respectful including debates on those ruled out of order) and AOB. Elections for other positions took place via email afterwards.

While I really miss such meetings, when held in real life (and of course with a few drinks and meal afterwards) I thought it went well and many thanks to our Regional Convenor, Yvonne Green, who chaired the meeting magnificently, with her very calm, very polite, inclusive but no nonsense manner.

I shall look forward to a more traditional "rough and tumble" UNISON AGM next year! (fingers crossed)