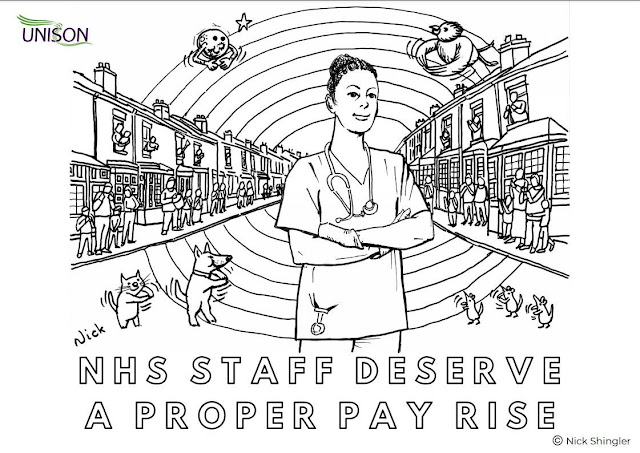 "Families and individuals across the UK are being urged by health unions to create colourful window displays in their homes and workplaces today (Thursday) to show support for NHS staff on the day they should have been getting a pay rise.

Artworks designed by children’s illustrators and writers are part of a growing collection of posters available to download from a campaign page designed by the 14 unions, who between them represent more than a million health workers across the UK.

This includes drawings from Nick Sharratt, whose books include Shark in the Park, Ketchup on Your Cornflakes? and the You Choose series; Emer Stamp, author and illustrator of the Diaries of Pig; and Nick Butterworth – who is behind the Percy the Park Keeper books.

Today is the day that NHS staff across the UK – including paramedics, domestics, radiographers, nurses, midwives, 999 call handlers and healthcare assistants – should have been due a wage rise, say unions. The three-year deal agreed back in 2018 came to an end yesterday.

But despite all the efforts made by health workers throughout the pandemic, the government says staff must wait until the NHS pay review body (PRB) makes its recommendation later in the summer.

To add insult to injury, say health unions, the government’s evidence to the PRB proposed a mere 1% pay increase. The Prime Minister has insisted it’s all that can be afforded, but last week health workers in Scotland were offered pay rises worth 4% overall.

A strong show of support from the public should help convince the government that the time has come for a rethink on NHS pay, say the unions.

UNISON general secretary Christina McAnea said: “The public want NHS staff to get a decent pay rise. They know how tough this past year’s been for health workers who’ve gone to incredible lengths caring for patients, saving lives and keeping us safe.

“It’s now time we did something for NHS workers. By downloading and colouring in supportive posters, people can show the Prime Minister just how much NHS staff matter to them.

“Health workers are worth much more than 1%. The entire nation knows this. Let’s get creative, show the government how very wrong it is on NHS pay and encourage ministers it’s high time they thought again.”