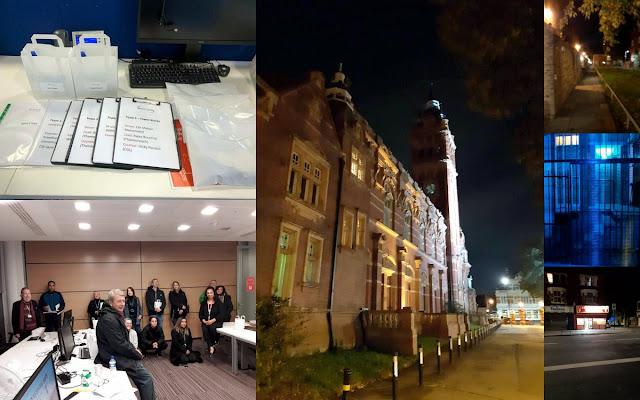 Last night I went to the Newham Council Dockside Building E16 at 11pm to be firstly briefed then sent off in teams to carry out our bi-monthly count of people sleeping on our streets in Newham. This has been disrupted due to Covid and tonight was a much smaller "sampler" exercise than in the past but we had 11 people out in 5 teams covering 59 sites. There was also a team at Dockside co-ordinating our visits and collating information.

There was a mixture of Newham Council staff, Councillors and partner outreacher workers.

After the briefing we left at around 11.45 to start the count at midnight. I was with two experienced outreach workers from the homelessness Charity "Thamesreach". We covered postcodes E6 and E12. This included East Ham (see Town Hall in collage) and Manor Park.

Newham is very different in the early hours of the morning. We visited a number of different sites which in the past are known for people sleeping rough. Including sites that as the Cabinet lead for Housing Service I knew had long standing problems of anti-social behaviour (not just due to rough sleeping).

We found no one in nearly all our patch except two - first outside a public building (where both rough sleepers were well known to the outreach workers and had either accommodation provided or had refused it) and some in  disused buildings on a council estate. Both sites will have been visited today by our early morning outreach team for them to try and engage and find better housing solutions. Our team found 6 people in total this morning.

We finished about 2am and then went back to Dockside to report and be signed out.

I am not sure that the total numbers for all teams can now be disclosed but I have now been on a number of these counts and the numbers are far,far less than in the past and certainly since the March Covid lock down, when our staff and stakeholders did a truly magnificent task in rehousing practically all our street homeless in Newham.

Compared to the 100 plus rough sleepers in September 2018 and the 68 in January 2020 we think we now have around 20, nearly all of whom (I will find out after tonight) have been offered help, support and alternative accommodation. Some of them so have serious health or other issues that mean they do not take up our offer of an overnight roof over their head.

We will not give up on these vulnerable people and hopefully the Government will recognise that our experience shows that if we have the promise of money and political will that working together we can and will do something about rough sleeping and not just shrug our shoulders and walk by. Let us get everyone off the streets permanently.

Did n't they put up all the homeless up in hotels?. I notice groups sitting outside hotels outside various budget hotels.

I hope they use the time, to turn their life around.

mostly hotels but unless there is suitable, affordable move on accommodation, tenancy support then they will end up back on the streets

How about working alongside the ASB hotline team for a day and reporting back to the blog?

I would love to know what these people are doing and how they resolve issues. There are 9000 cases of ASB in Newham. How many get resolved? What do they think needs to be done to bring numbers down?

Been there thank you. I have worked as an ASB investigator in the East End on and off for best part of 27 years. Leaving aside that 66% of children in Newham are brought up in poverty and 10 years of austerity (20,000 less Police) we can and will manage ASB by effective working with Police, residents, other stakeholders and Council.