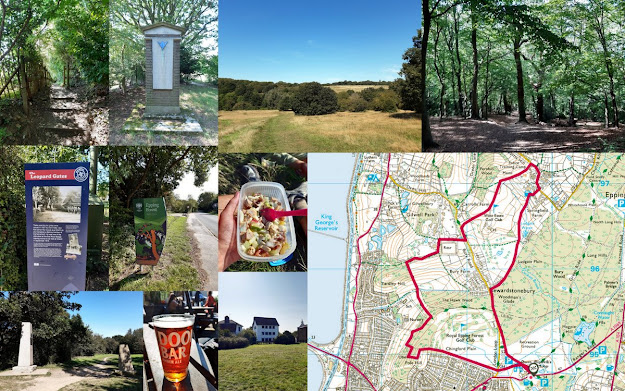 A lovely 5.2 mile walk today only 21 minutes from Forest Gate. We started off at the car park opposite Queen Elizabeth Hunting Lodge then walked along Chingford Plain towards Pole Hill. This is where TE Lawrence (aka Lawrence of Arabia) owned land and lived for a number of years. The views of London are outstanding.

Next was some peaceful forest walks where we joined the "London Loop" route and walked up Yardley Hill with more marvellous views of London. After lunch on the ridge we walked past Gilward Park, the headquarters of the Scout movement.

While on the public footpath alongside West Essex Golf Club we came across a hidden memorial to the American 184th AAA battery, who were stationed here in 1944 to protect London against enemy bombers. What a shame that this memorial is not highlighted more prominently. The 184th later served in Normandy following the D-Day invasion.

Next was some really delightful green lanes and footpaths back to the lodge. We ended up at the Royal Forest Pub/hotel for some outdoor rehydratation (see picture of Doom Bar). Chingford station is only 10 minutes walk away.