Are you with them? – an appeal for solidarity donations 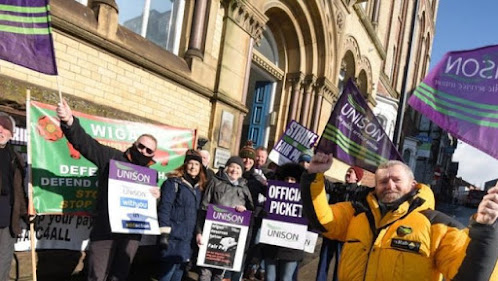 UNISON members employed by the charity We Are With You (formerly Addaction) in Wigan and Leigh are taking strike action over their employer’s failure to pay them the 2018-21 NHS pay award.

There are 29 members involved in the dispute, and they are soon to embark on their sixteenth day of strike action. The strike and picket line will be socially distanced.

The staff were previously employed by the NHS, and the charity promised that they would continue to receive the NHS rates of pay.

Members would have gained an average of around £4,000 over the three years of the pay award, but instead We Are With You have offered non-consolidated pay-offs and pay rises worth only half that amount.

Meanwhile, members have been angered by their employer’s costly re-branding exercise.  Changing the name of the charity from Addaction to We Are With You has cost £140,000 – more than enough money to have settled the dispute.

UNISON North West regional organiser Paddy Cleary said: “This dedicated group of key workers are standing firm. They understand fully that without a consolidated NHS pay award, accepting any offer from We Are With You would amount to voting for pay cuts.

“It is a sad state of affairs that support workers, who have given their all during this pandemic, should have to take 26 days of strike action in order to get their employer to listen to them.

“It is completely wrong that We Are With You can’t find the funds for their support workers whilst their CEO earns well over £100,000 per year.

“It’s time for We Are With You bosses to see sense and to keep their pay promises for the benefit of their support workers, their service users and the people of Wigan and Leigh.”

The Wigan Branch and North West Region are asking for donations from branches to the hardship fund.

Please donate via bank transfer to:

Or send a cheque payable to ‘UNISON Wigan Metropolitan Branch hardship fund’ to: