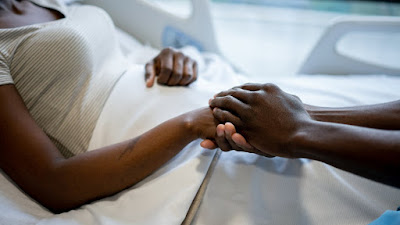 "As a black woman, the risk seemed too high. But when I think about how worried the doctors were about me, I realised what a mistake I’d made...

I started feeling unwell at the end of August. Initially, it was just lethargy that I put down to lockdown and not leaving the house every day. Then things got worse. I started feeling faint and vomited for hours at a time. This went on for days. My first thought was: could I be pregnant? But Clear Blue tests told me multiple times that, no, I wasn’t. I started seeing blood in my urine, which scared me.

I contacted my GP who told me to do a urine sample. While I was waiting for my results, things deteriorated further. I started to feel thirsty all the time, the vomiting and blood in the toilet were getting worse. I lost my voice and could barely speak. A few days later, a locum from my GP practice called: they had lost my urine sample and I’d have to do another one, in the meantime, they’d prescribe me antibiotics for another week. My boyfriend (Chris) had by then started pleading with me to go to A&E. My answer was a straight no: "If I go to hospital, I'll get Corona. Do you want me to die"?

I grew up and am a Labour Councillor in the London Borough of Newham, which at one point had one of the worst rates of Coronavirus in the UK. It is also one of the most diverse parts of London, which is notable considering how many news stories we’ve seen about how the virus proves even more dangerous, and even more deadly, for people from black and other minority ethnic backgrounds. By the time I fell ill, I’d already seen people in my community get sick and pass away from the virus. As a black woman, there was no way I was willing to risk going to hospital where I might catch Covid-19 and never leave.

A few days later, Chris stopped giving me a choice in the matter. I couldn’t get out of bed and was vomiting bile. I felt like I was about to die. He packed me a bag, called an Uber and told me we were going to the hospital.

When we arrived, I was sent straight to A&E. Because of Covid restrictions, I had to go alone and Chris sat outside. The doctor ran some blood tests, which took what seemed like forever, as my veins are very hard to find, and came back to tell I had DKA (diabetic ketoacidosis) which is a very serious condition and potentially life-threatening.

They admitted me to a high dependency ward (again, alone as Chris wasn’t allowed in) where they put several cannulas into me and began pumping my body with fluids. Chris went back home for an overnight bag for me. When he came back to the hospital, I begged the nurse to unplug me for five minutes so I could see him and get my things, which she reluctantly agreed to. I burst into tears as I hugged him, and then went back to my bay which I didn't leave for the next three days.

For the following five days I spent in the hospital, the nurses and doctors monitored me continuously and took a blood test every hour, including overnight. On the fourth day, they told me I had type 1 diabetes. The nurse showed me how to inject myself (which I need to do five times a day) and how to test my blood sugar levels. I also spoke to a dietician about the changes I'd need to make to my lifestyle and food choices, which isn't as bad as I first feared. We even went through my Instagram food pictures.

It's been just over two weeks since I first went into A&E and I'm still processing everything. While there's a long road ahead to deal with this, I'm just thankful to be home and able to plan for the future.

When I think about how worried the doctors were about me when I arrived on that ward, I realise what a mistake it was to refuse to go to hospital out of fear of the virus. I was so scared of Covid-19 killing me that something else nearly did. Other illnesses will always exist, and the NHS is there to treat us when we need it most – I hope others use it in time too.

Nareser Osei is Labour councillor for Stratford and New Town ward in Newham
Posted by John Gray at Monday, September 28, 2020