80th anniversary of the start of the Blitz - Monday 7 September 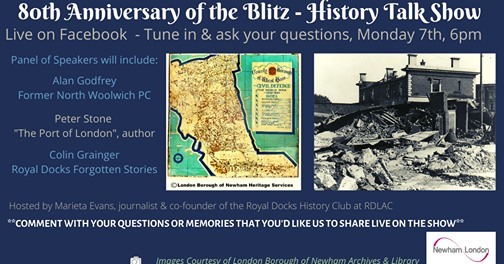 My Grandfather, Sgt John Gray, served in an anti-aircraft regiment during World War 2 and my family believe he was involved in defending London from Nazi air attacks.

Hat tip Newham web page "Mayor Rokhsana Fiaz and Newham Council will be marking the 80th anniversary of the start of the Blitz by laying wreaths on 7 September to remember those who died at the hands of Hitler’s bombs.

Mayor Fiaz will be joined by Deputy Mayor Councillor Charlene McLean (Communities) and Deputy Mayor Councillor John Gray (Statutory) at the mass grave and memorial in Manor Park Cemetery, Sebert Road, Forest Gate, at 10.30am to pay tribute to the civilian casualties of the enemy bombing.Councillor McLean, Cabinet member for community neighbourhoods, said: “There are residents who remember the Blitz through direct experience or have learned about it through family stories, school lessons, movies or remembrance commemorations. It is important that those who lost their lives are not forgotten. It is also important that we remember the difficulties that those who were left behind had to face.”Newham Council is also hosting an online exhibition to commemorate the 80th anniversary of the Blitz.Black Saturday -¬ Stories from the Blitz, features photographs and first-hand accounts from local residents who recall the first few days of the Second World War German bombing campaign, which lasted from September 1940 until May 1941.The term Blitz was first used by the British press and is the German word for lightning. The bombing started on 7 September, or Black Saturday as it became known. For eight months, London was systematically attacked.The aerial bombardment consisted of high explosive bombs and parachute mines, which had a devastating effect on the then boroughs of East Ham and West Ham. The Royal Docks area was one of the main targets for the Germans with the intention to damage the commercial life of London by bombing warehouses, wharves, railway lines, factories and power stations of the East End.The Blitz ended on 11 May 1941 when Adolf Hitler called off the raids in order to move his bombers east for Germany's invasion of Russia.Councillor McLean added: “The online exhibition tells the story of those early days in one of the darkest periods in our local history. The German Luftwaffe tried to break the spirit of this part of the East End, but they failed. The first-hand accounts of local residents are as awe-inspiring as they are tragic.”You can visit the online exhibition and read the stories from the early days of the Blitz.