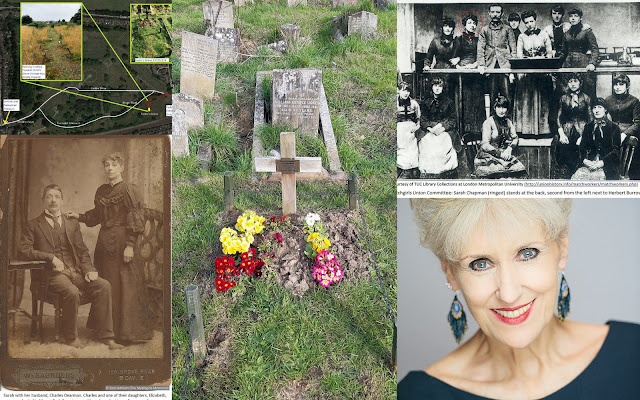 "We have written to the Secretary of State for Justice and await his reply. Please rally your MP to help us at least pause this brutal mounding process...

Support from Parliament to Theatre

MPs, Peers, Unions, and Academics are fighting to save a Matchgirl’s grave from JCBs. Manor Park Cemetery is the resting place of working women’s rights campaigner, Sarah Dearman (née Chapman) but the private Cemetery want hers, and other graves, brutally levelled and ‘mounded’ with additional soil to make way for new money-making plots.

Sarah Chapman was a leader of the famous 1888 Matchgirls Strike in London’s East End. The women worked at the Bryant and May factory in Bow and are seen as the founders of modern unionism and inspiration for the Dockers Strike. The Matchgirl’s story has been told in plays and musicals around the world and was commemorated at the 2012 London Olympics.

Historians, women’s groups and unions have joined Sarah’s family to stop the destruction of this important heritage site. However, the Cemetery Directors will not speak to the family or campaigners and intend to cover her paupers grave within weeks. The family have now written to the Secretary of State for Justice and are supported by MPs, Peers, Academics and Unions. Newham Council has asked the Cemetery for discussion. A petition has 7,000 supporters, including star of stage and screen Anita Dobson, herself a Stepney East End girl.

Anita Dobson said “Sarah and these women fought for our workings rights and to destroy her resting place is abhorrent. People want to come here to pay their respects and remember what she and the Matchgirls achieved for us all”.

Mounding is not recommended by the Institute of Cemetery and Crematorium Management. They normally offer advice on alternative methods to increase burial space. In the past, skulls and bones have been visible at the Manor Park site after similar destruction work. The grounds also contain WWII civilian graves including some from the 1943 Bethnal Green tube disaster.