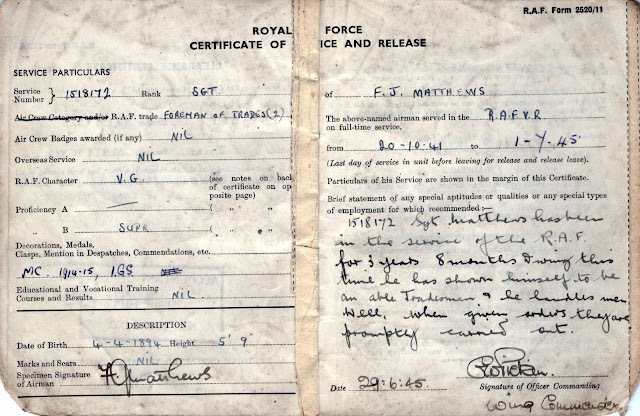 Both of my Grandfathers served in the Second World War. My maternal Grandfather ("Taid" in Welsh) Fred Matthews was a sergeant in the RAF See his discharge papers above. He had also managed to live through the carnage of Gallipoli and the Western Front in the First World War (during which he had been decorated with a Military Cross)

My paternal Grandfather (yet another John Gray) was also a sergeant but in the British Army for the whole of World War 2. He had been a Territorial soldier before the war and was one of the first to be called up. However, apart from knowing that he served in a Scottish anti-aircraft regiment,  I know nothing about his wartime service. Family folklore is that he may have been stationed in London during the Blitz and that he was part of a Unexploded Bomb (UXB) team.

I have finally downloaded the forms to apply to the Army records office for a copy of his service records.

I wonder how both of them celebrated VE day 75 years ago? Now sadly too late to ask them.

Thinking of both of them today and their comrades.
Posted by John Gray at Friday, May 08, 2020

I have just found your entries relating to Frederick John Matthews.
This could be a revelation to my wing of the family, as "Uncle Fred" was a semi-mythical figure to us in South Wales, after he went north. I am his great-nephew, grandson of his sister Elizabeth, and I can be contacted on graham@airbondsplicer.com.
We have a couple of bits of information which could be interesting to you, and a good photo of him with his MC ribbon.
Graham Waters

Really good to hear from you and I would love to hear about this family history (as will other members of the Matthews kith and kin) and see the photo.

I wonder what relation we are?

My email to you on graham@airbondsplicer.com" was returned as invalid? is this the right email address?

Did you inadvertently add the " at the end, as it has shown up on your message?

graham@airbondsplicer.com is certainly kosher, as it's my company e-mail.