"earliest known photo of a mass gathering of people in London - the Chartist meeting on Kennington Common, 10 April 1848" 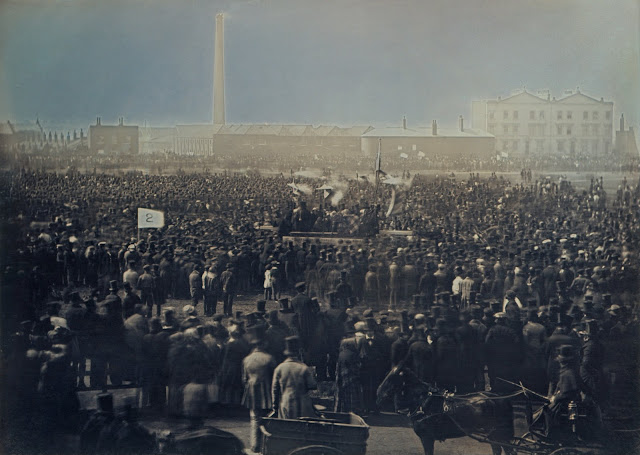 "This is a daguerreotype (an early form of photograph) of the Chartist meeting held at Kennington Common on 10th April 1848. It was the last time the Chartists attempted to present a petition to Parliament. Fearing an attempted revolution, the Government prepared immensely for the meeting and filled London with 85,000 special constables, as well as putting 8,000 soldiers on alert.

Although there were probably upwards of 20,000 (perhaps as many as 50,000) people present, the meeting was a peaceful one. As the crowd dispersed Feargus O’Connor and the Chartist Executive delivered the petition to Parliament in a series of coaches. O’Connor claimed the petition had 5,700,000 signatures, but when the clerks in the House of Commons examined it, they found it to feature less than two million names.

These included a number of falsely-signed names, such as those of Queen Victoria, Sir Robert Peel and The Duke of Wellington, which only served to discredit the petition further. Despite the huge amount of legitimate signatures, Parliament did not take the petition seriously and it was rejected".

Taken from: Daguerreotype of the Chartist meeting at Kennington Common
Date: 10th April 1848
Copyright: The Royal Collection © 2009, Her Majesty Queen Elizabeth II
Posted by John Gray at Monday, May 18, 2020