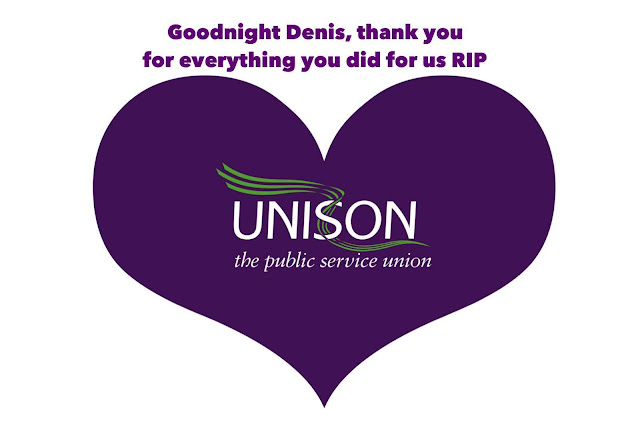 "It is with great sadness that we report the death of our much loved friend and comrade Denis Keatings, Joint Regional Convenor of UNISON NI. He will be greatly missed by generations of UNISON members whose causes he championed throughout his entire working life.

Denis joined NUPE in the 1970s and was part of the historic struggle known as the Winter of Discontent, when public service workers engaged in sustained strike action for pay justice. For his fearless leadership Denis was soon elected as Convenor of the Mater Hospital, then part of the NUPE's largest branch, North & West Belfast District Health Branch, covering the Mater, the Royal Victoria Hospitals and social services across the North and West of the city.

He campaigned for equal pay for the women cleaners, successfully spearheaded the fight against privatisation of catering and cleaning services at the Mater and supported our members through some of the darkest times of 'the Troubles'. In 1993 UNISON was born and the Mater Hospital became a union branch in its own right. Denis was immediately elected Branch Secretary, a position he would be continuously returned to for more than 20 years until, having won the confidence of the entire membership of UNISON in Northern Ireland, he was elected as our Joint Regional Convenor.

Denis was a trade unionist to his core. He wanted nothing more than justice and fair treatment for our members and they in turn loved him for it. We all did. He was a big, fearless, loyal fighter with a generous heart. There was no task he would not tackle, serving the members in the workplace, across Northern Ireland, at UNISON UK level and in the ICTU.

He tackled injustice wherever he found it, whether it was the denial of workers rights, death threats against health workers, attempts to downgrade his beloved Mater Hospital, the plight of the homeless in North Belfast or the plight of the Palestinian People.

We are proud to call Denis a UNISON activist. We pay tribute to the enormous contribution he has made to our union. We will miss him deeply. We send our love to his partner Elaine and his whole family.

Tuesday 19 May sees the funeral of Denis Keatings, UNISON Northern Ireland joint regional convenor. Denis’ colleagues at Mater Hospital will pay tribute at 10.25 as his funeral cortege passes the hospital. If you’d like to pay a virtual tribute to a lifelong champion for working people, please print out this heart and take a photograph of yourself holding it, or add it to your social media profile at 10.25 on Tuesday. You can add your own words or use these: We stand in tribute to Denis Keatings, our thoughts are with his family, his friends and our UNISON family today. 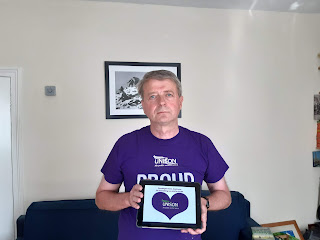