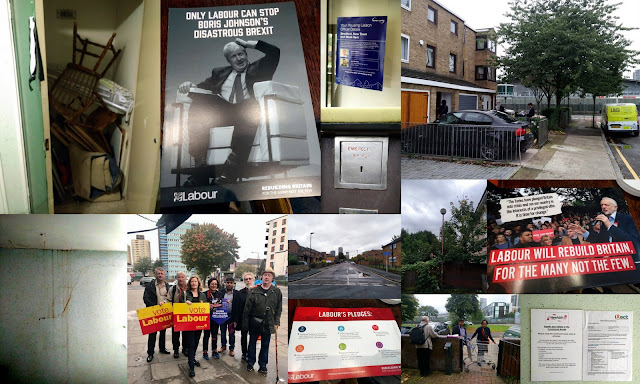 This morning we went on a #LabourDoorstep to speak to local residents in West Ham ward. We split into 2 teams and knocked on doors to ask residents whether they had any problems or issues with Newham Council.

As a local ward Councillor I had a number of challenging but always civil conversations with residents. The ward is strongly Labour but that does not mean that residents weren't willing to let us know their views on national as well as local issues.

I picked up various repair and management issues such as a new roof leak into a communal area, insecure storage areas, overgrown gardens (in fact, arguably mini jungles), ASB, fly tipping and a 13 year horrible on going waste pipe repair issue with one of our tenants, Newham technical services and the leasehold flat above.

Residents were really pleased that the Mayor of Newham was there to visit them in person and to talk about their concerns on a damp and windy Sunday morning.

On national issues people told me that we are in a mess but they mostly accepted my argument that Labour are the only party capable of fixing it by stopping a "No deal" Brexit, overturning privatisations, building more homes and supporting the NHS.

After 4 days of at times hot air, speeches, fringes and debates at Labour Conference last week, it was good to be back in West Ham, on the doorstep, talking to real people about real issues.
Posted by John Gray at Sunday, September 29, 2019