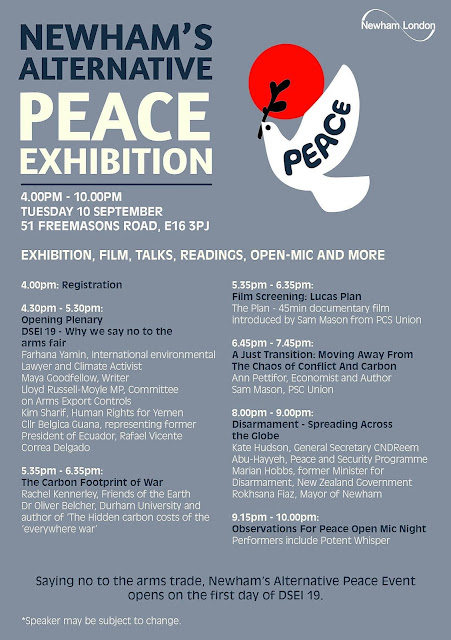 "Newham Council is giving residents the chance to show their opposition to the Defence and Security Equipment International (DSEI) arms fair with its alternative peace exhibition.

The event, which follows a motion agreed by councillors in June expressing dismay at hosting the arms fair in the borough, will be held between 4pm and 10pm on Tuesday 10 September at 51 Freemasons Road, E16.DSEI will run at the ExCeL exhibition centre in the Royal Docks from 10 to 13 September, the council’s alternative peace event will run in opposition of the arms fair.The alternative peace exhibition will include film screenings, talks, readings, and an ‘observations for peace’ open mic night.Among the speakers will be:
Mayor Fiaz said: “It is abhorrent that such an event should happen in Newham and it is important than we make clear our opposition to the DSEI going ahead in our borough.“Newham is a very diverse borough and many of our communities have links across the globe to those areas that have been affected by conflict, displacement and the horror of war.“This council is taking a stand and, in line with the motion approved at Full Council, is doing everything we can to prevent the DSEI coming to Newham ever again.“This is part of the reason why the alternative peace event is so important. It gives the people of Newham the opportunity and the opportunity to protest, allowing them to make their views clear to ExCeL – that they do not want the arms fair in their borough.“Our alternative peace event will be themed around the climate emergency which is being exacerbated by devastating conflicts, to save to our planet we must first end wars.”Talks will include:
In addition, the will be a screenings of Lucas Plan and a videos in collaboration with the international campaign Stop Killer Robots. The will also be an open mic night with rapper and poet Potent Whisper among the performers.The event will be accompanied by a unique soundtrack of selected music and speeches by historic figures on the notion of peace.Free refreshments will be provided at the alternative peace event".
Posted by John Gray at Monday, September 09, 2019