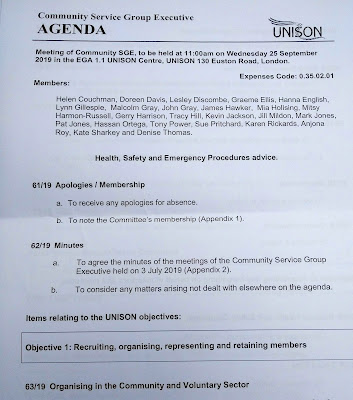 Since Jeremy gave his leaders speech yesterday in order to be back at Parliament, I also left Labour Party Conference early this morning to go to UNISON centre in Euston.

The UNISON Community (for our housing association and voluntary sector members) Service Group Executive (made up of elected lay members) was meeting and I was able to participate and give them a verbal report as one of their two National Executive Council members.

It was a brief report since there had not been a regular NEC or subcommittee meetings since the last SGE on 3 July.

"As previously reported at the NEC meeting on 3 July 2019 (same day as SGE) I was reappointed to the Policy and Development Campaigns Committee (PDCC) and as an employer trustee to the UNISON Staff Pension Committee.

I was also re-elected as Vice Chair of Industrial Action Committee (IAC) and by Labour Link NEC members to be on the National Labour Link Committee.

I stood down from Welfare Committee due to time pressures (which I regret since it is a very important committee).

There was also a brief meeting of PDCC to agree TUC Congress business - motions and delegates.

As a NEC member, later that week I attended the Unison National Labour Link Committee Forum in York. This is a very good 2 day conference during which I spoke on behalf of National Committee on motion 2 which is on cuts to "Local Government Finance".

As Vice Chair IAC, I have agreed with the Chair, our UNISON Vice President, Sian Stockham, to a number of strikes including those involving Community members.

As Chair of staff pension investment subcommittee I recently attended an all day trustee meeting with advisers and fund managers".
Posted by John Gray at Wednesday, September 25, 2019