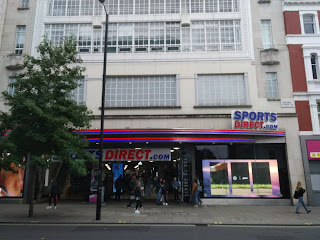 This morning I went to the Sports Direct Annual General Meeting, during which I had at times a rather robust conversation with its founder, majority shareholder and Chief Executive Officer, Mike Ashley. The media were banned from the meeting.

"Sports Direct (SPD.L) received an angry reception from major shareholders on Wednesday at a tightly controlled meeting with investors.

The discount sports retailer faced a shareholder rebellion at its annual general meeting with investors. Press were barred despite intense public interest in the company.

At the AGM, 9% of voting shareholders rejected Mike Ashley’s reappointment as CEO and 17% of independent shareholders who voted tried to stop David Brayshaw being reappointed as a director. Other directors faced smaller rebellions.

Founder Ashley owns over 60% of shares in the business, meaning he was always set to win all the AGM motions. However, independent shareholders expressed their anger at the way the company is being run at the voting box and outside the AGM.

“I’m hoping that everybody wakes up, smells the coffee, realises there’s a problem and fix it,” John Gray, vice-chair of the Local Authority Pension Fund Forum, told the press.

Sports Direct has in recent months lost its auditor, unveiled a surprise £600m ($742m) tax bill, and warned that its controversial acquisition of bust department store House of Fraser is hurting the wider business. It is currently struggling to appoint a replacement auditor.

“When you’re dealing with a majority shareholder, somebody like Mike Ashley — who I’ve never met before — you need to have a robust team of directors, confident in what they do with extensive experience in order to stand up to him.”

Gray, who is also a councillor in the London borough of Newham, said he represented 80 local authority pension funds with assets of £250bn ($390.1bn). Collectively, his organisation represents the retirement plans for 4 million UK citizens.

“It’s really, really important that when we have issues with companies that we have to invest in because they’re in the index, that they meet with us and address our concerns properly,” Gray said.

“I don’t want to have another robust conversation in 12 months time but we will if necessary.”

Gray said he voted against all motions at the AGM, which attracted less than 20 attendees and ran for about an hour. Ahead of the meeting, advisory group Institutional Shareholder Services (ISS) counselled investors to vote against Ashley’s reappointment as CEO.

“This could be a test case for good governance in the UK,” Gray said. “The issue over the way workers are treated at Sports Direct should have been a signal to everybody: there’s a problem here.”

Sports Direct was criticised by MPs in 2016 for “appalling working conditions and practices,” after an investigation uncovered workers at its Shirebrook warehouse being paid below minimum wage and penalised for taking breaks, as well as health and safety breaches.

“It’s not just about workers dignity and their rights — it follows through with the governance in the company,” Gray said, “and that’s why you’ve got a £600m unexpected tax bill from the Belgian government, that’s why the auditors have walked away from Sports Direct, that’s why — and there may be other reasons as well — they can’t find an auditor.”

Sports Direct was due to appoint an auditor at today’s AGM. The company told investors it was “in the middle of a process” but did not comment further.

If Sports Direct is unable to appoint an auditor in the next seven days, it will have to ask business secretary Andrea Leadsom to step in and appoint one on its behalf.

Besides questions over governance and auditing, Sports Direct’s board also faced criticism for their failure to pay a dividend.

“The share price is low because who’s going to buy a share when you’re not getting a return?” Laurence Corbet, a Sports Direct shareholder for over a decade, told the press outside the meeting.

Corbet said he too voted against all the resolutions but said he would support management if they introduced a dividend. He called Mike Ashley the “enfant terrible of retail, but he gets things done.”

Ashley, who owns over 60% of Sports Direct, complained at the AGM the media was “painting me as a panto villain”.

A spokesperson for Sports Direct said after the AGM: “We remain totally focused on delivering our elevated proposition, which following the AGM continues to be supported by the investor community.

"We are already seeing some exciting milestones with the acquisition of Jack Wills, the opening of the new Flannels flagship store in London, and plans for Fraser are now in motion.

"We are building a young and dynamic executive team to assist in this transition but making sure we retain the core values in the existing business that have allowed the business to prosper over the years.”

The spokesperson gave no update on Sports Direct’s auditing situation.