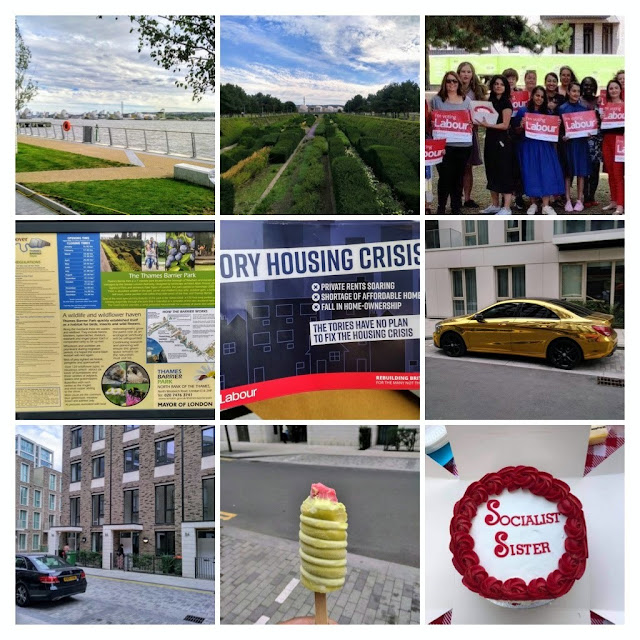 After a lazy summer I was back on the campaign trail on Saturday in Royal Docks ward in East Ham. We met after the "Socialist Sisters" picnic in Thames Barrier Park (a truly lovely park, well worth a visit) . Local MP Stephen Timms had joined the sisters at the end of their picnic with London Assembly member, Unmesh Desai.

The canvass session was organised by Royal Docks branch secretary, Cllr Genevieve Kitchen, and we went around the Newham side of the Thames Barrier area. The theme of the canvass was about the "Tory Housing Crisis". This area compromises of newly built expensive apartment blocks with some town house terraces, many of which are privately rented.

The canvass was successful even though it is notoriously difficult to get into many of these new developments to knock on doors or leaflet due to entry phones entrances.

I spoke to tenants who privately rent, who said despite earning good money in London the rent they pay just makes it impossible to live a decent life and they were considering leaving London.

However, most people we managed to speak to supported Labour, even though there was one door slammed shut in the face of a canvasser, since the resident believed we are now a "racist party". Not good.

Mindbogglingly high rents and unaffordable property price rises could make this an unlikely Labour stronghold if we get our National housing policy right (which I think we have).
Posted by John Gray at Tuesday, September 03, 2019

When you went knocking on doors. Had any of the residents read this article from the Newham Recorder?

Were they aware it was Labour councillors who had voted for more expansion at London City Airport?

Unmesh Desai, sat on the planning committee which voted it through. Many of these planes fly over Tower Hamlets, so how could Labour in East London have selected him as an Assembly Member?

I would have been happy to live in Newham, but the noise from the airport is driving me nuts. On a bad day, the air is foul of jet fuel. It was never like this. When they opened, the public enquiry limited their operations to 30,000 flights. Why did Newham Council let London City Airport break those restrictions? Now they want want to expand again to 140,000. They are consulting again. It never ends!!!!!

Stephen Timms did nothing to protect the area.

Some rich investment company comes along, buys City airport, they expand it, make a killing on their value going up (because Newham Council approves expansion) and then sells it to another investment company, who decide they can increase the value and make another killing. That is how it has been. Do the residents get a share when the value of the airport goes up? We are paying the price in terms of noise and lower quality of life.

Newham Councillors should boycott flying out of City Airport, in solidarity with residents.

Sadiq Khan wants to tackle air quality, how about dealing with smell of jet fumes which escape from London City Airport. People with older cars, have to pay £10 to drive into London, but any benefit is taken away with expansion at City Airport.

Currently the airport shuts on Saturday at 13.00 and re-opens on Sunday at 12.30. However, the airports want to get rid of this respite from noise.

We have a housing crisis. The area is blighted by aircraft noise. I can't afford to move out, because prices are high. My housing crisis was not created by the Tories, but by Labour.

If you want to solve the housing crisis, then put a compulsory purchase order on the airport and build houses. You can buy it for peanuts, because the land is blighted. Well that is what the airport said when they bought the docks to build over it. They paid peanuts for the extra 22 acres..... I heard it was £700k.

As a councillor can you tell me how much the Royal Docks Enterprise Zone is costing Newham Council?

Osborne changed the policy on Business Rates, so now local councils get to keep it.

In a previous budget, George Osborne also turned the Royal Docks into an Enterprise Zone, with special tax status. So these businesses will not be paying anything. I don't know when they will start paying Business Rates to the Council, but it will cost Newham millions in lost revenue.

I blame London City Airport for this loss of revenue. Building 1000 (a.k.a Newham Dockside) was empty for 5 years. The airport claims it benefits the area, but it has done harm.

The London Development Authority (defunct) had plans to build more office blocks, but they did n't because of the failure of Building 1000.

The Royal Docks has attracted, the Chinese firm of AIB and they are building new office blocks, but they are likely to be occupied by Chinese firms, which won't benefit local residents unless they are bilingual. Most of this will be to sell Chinese good to us, so their activity will not benefit the UK economy.

I was disheartned when I saw the news, Chinese students in Australia attack Hong Kong students who where protesting against Beijing. It makes me question, Chinese attitude to workers rights and human right. It is a concern when Chinese companies open offices in Newham. There is a distinction between a Chinese and a Hong Kong firm.... Will Newham Council monitor?


Why could n't Newham attract companies like Google to the Royal Docks? They spoil their workers.

The new administration in Newham has a very different approach to the airport and climate change as you have shown with the recent letter by the Mayor. While I do disagree that Stephen Timms has done nothing to protect the area?

If you cannot move out because prices are high then it is a tory housing crisis since the reason prices are so high is the government has rigged the housing market for electoral advantage.

You can't compulsory purchase anything without a legal power.

I won't do enquires for anonymous questions and I do not understand your points about Chinese/Hong Kong?